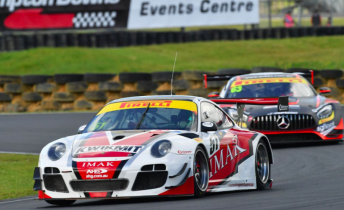 Overnight rain presented a slippery surface for the 20 minute hit-out at the new 4km circuit.

The Macpherson/Shiels Porsche stormed to the top of the times early in the session with a 1:35.67s, which eclipsed an earlier effort from the Michael Caruso/Matt Simmons Nissan GT-R.

The session featured a lengthy stoppage at the halfway mark when Daniel Bilski ran straight on at Turn 1 in the #2 Jamec Pem Racing Audi R8, he shares with Supercars ace Garth Tander.

Marshals managed to recover the car but only in time for the field to complete an out lap when action resumed.

After topping the times in Friday practice, Lago Racing continued their strong showing in third ahead of the Caruso/Simmons Nissan and the Liam Talbot/Jake Fouracre Audi R8.

Walkinshaw Racing was sixth fastest albeit 2.1s adrift of the pace having only completed two flying laps.

The opening Australian GT qualifying session is scheduled to begin at 0830 AEDT.