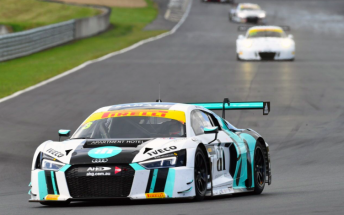 The Tony D’Alberto/Ash Samadi Audi R8 set the pace in opening practice for the third round of the Australian GT Endurance Championship at Hampton Downs.

The Audi Customer Racing Australia prepared entry clocked a 1:30.84s effort early in the 40 minute session which was interrupted by two stoppages.

Supercars co-driver D’Alberto surged to the top of the times with his sixth flying lap at the new 3.8km circuit to eclipse the early pace-setting Jamec Pem Racing Audi R8 of Garth Tander and Daniel Bilski.

Bilski has been called up as a late replacement for car owner Steve McLaughlan, who is unable to attend due to business commitments.

Audi filled the top three spots with the GT Motorsport entry second fastest despite an early off at Turn 1 which brought out the red flags after seven minutes.

The Supabarn Supermarkets Audi, piloted by Theo and James Koundouris, was third fastest a fraction ahead of the Walkinshaw Porsche of John Martin and Duvashen Padayachee.

Jack Perkins put the Erebus Mercedes SLS GT3, he shares with Mark Griffith, in sixth while Tander and Bilski were seventh quickest.

The Steven Richards Motorsport BMW M6 GT3 was 15th after causing the second red flag following a spin at Turn 7.

The second 40 minute practice session is due to begin at 1355 local time. 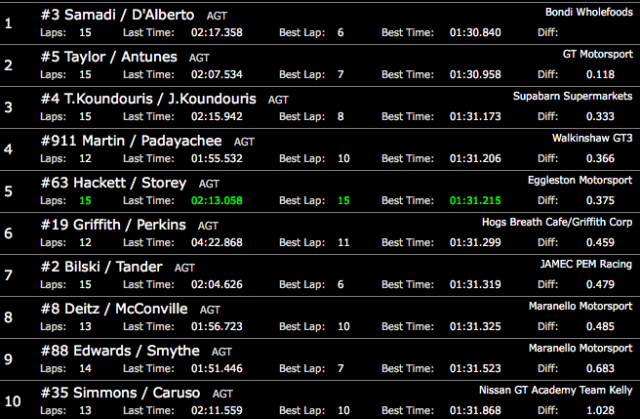