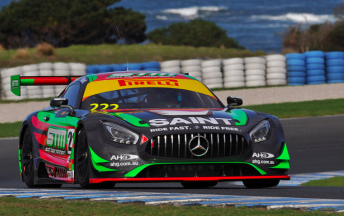 Scott Taylor has withdrawn his entry from this weekend’s Australian GT Hampton Downs 101 as he recovers from a leg injury sustained at the Castrol Gold Coast 600.

The Queenslander was involved in a nasty crash in Carrera Cup practice last Friday that saw him taken to Gold Coast Hospital with a left leg injury.

Taylor hit the wall on the exit of the first chicane which left the chasing Nick McBride with nowhere to go, resulting in a heavy impact with the driver’s side of the #222 Porsche.

Initially feared to be a broken leg, examinations revealed Taylor avoided any fractures but suffered a severe cut to his left thigh, heavy bruising and internal bleeding.

The injury has ruled him out of the penultimate round of the Australian Endurance Championship which he was due to contest alongside Craig Baird in a Mercedes AMG GT3.

After being released from hospital on Saturday evening, Taylor is hoping to return at Highlands Park for the Australian GT finale from November 11-13. 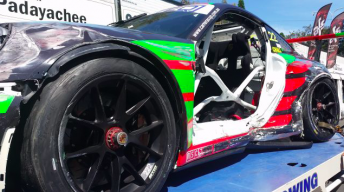 “I left hospital in a wheelchair and I’m already on crutches and pretty mobile, but I certainly can’t race this weekend,” Taylor told Speedcafe.com.

“There is a lot of deep muscle damage and internal bleeding in the left leg but it is significantly better than having a broken femur.

“We are just going to hold out to see if I can make Highlands Park.

“At this stage the car is withdrawn.

“There are a couple of people who would like to drive the car but it is all about costs and getting insurance which is proving more difficult.

“I’d say the car will remain parked up until I’ve recovered enough.”

Further investigation into the crash has revealed Taylor’s leg injuries were sustained by the tow hook of McBride’s car that had entered through intrusion bars and penetrated his leg.

“I was bleeding from my thigh and my legs were bent up in the car,” he added.

“We had a look at the car and it looks like the tip of tow hook had managed to get passed everything and through the seat.

“Part of the seat was left on the toe hook.

“I’m pretty lucky to be honest.

“The people at the track, in the ambulance and at the hospital were fantastic.

“The care they applied was unbelievable. It made me feel in safe hands.”

Eggleston Motorsport’s Peter Hackett/Dominic Storey entry will now be the only Mercedes-Benz AMG GT3 in this weekend’s field.

An older, SLS model Mercedes will also take to the track in the hands of Mark Griffith and co-driver Jack Perkins.