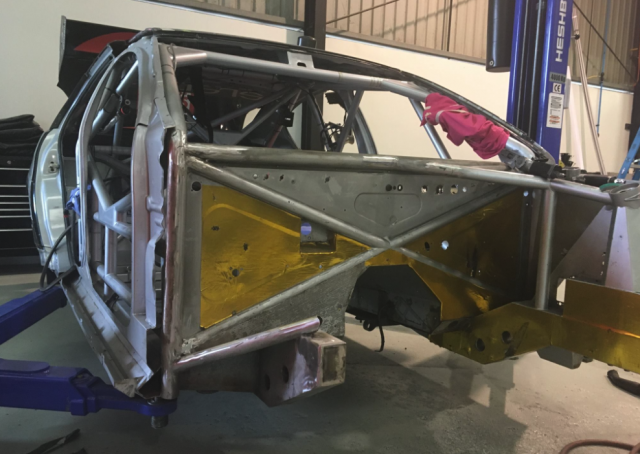 Erebus Motorsport is working flat-out to repair Shae Davies’ crashed Holden in time for its scheduled departure to New Zealand.

Clipping the apex wall at Turn 11, Davies careened into the concrete on the right-hand-side, heavily damaging the car’s right-front quarter.

Erebus general manager Barry Ryan says that the chassis repair will shortly be completed before the car is then repainted and assembled ahead of Sunday’s travel deadline.

“Jimmy (White) transported his jig from Castlemaine to Melbourne on Monday and the crew were here first thing Tuesday to get stuck into it,” said Ryan.

“He was here assembling the jig while the crew stripped the car, so we are working as efficiently as possible.

“The front half of the car has been cut off and will be back on the jig this afternoon; we are aiming to have it repaired in time to have it painted tomorrow, then start reassembling it.”

Ryan described the repair as the “first big test” for his crew which was put together over the off-season following the squad’s move from Queensland.

“The crew have been fantastic; both car crews worked together to strip the car, and now they’re working on the other car to get that ready while they wait for car #4,” he said.

“There’s also a couple preparing all the bolt on components for car #4, so we don’t delay anything.

“As a team, this is our first big test. We haven’t had any major damage all year so we’ve been lucky until now.

“Realistically we will be working until the container leaves on Sunday, but we’re under control.”