SVG: Critics should apologise to Premat

SVG: Critics should apologise to Premat 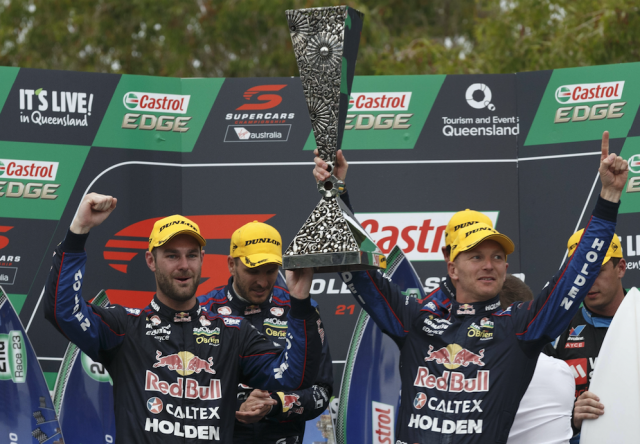 Van Gisbergen and Premat with the Pirtek Enduro Cup

Shane van Gisbergen says there are “a few people” that need to apologise to co-driver Alex Premat following their success in the Pirtek Enduro Cup.

Triple Eight’s move to secure Premat for its expanded three-car program this year was one of the most publicly debated co-driver signings in years.

The Frenchman had earned a reputation as being fast but incident prone during his time with previous team Garry Rogers Motorsport.

Repeatedly forced to brush off questions about being a “risky signing” in the lead-up to Sandown, Premat replied emphatically on track.

Van Gisbergen and Premat finished in the top two in all four endurance races, including scoring victory in Saturday’s opening leg of the Castrol Gold Coast 600.

“I think Alex has done a fantastic job and there’s a few people that should apologise to him,” said van Gisbergen after securing the Pirtek Enduro Cup.

“It’s been great to work with him and also the team, to be second, second, first and second in the Endurance Cup (races) is awesome.

“We’re just two lucky guys who get to drive a car that’s that good.”

The duo’s results came despite being the victims of double-stacking at Sandown, Bathurst and the Sunday race on the Gold Coast.

Premat’s only notable mistake was a Safety Car restart infringement on Saturday at Surfers Paradise, which resulted in a 10 second penalty but did not stop them winning the race.

Proud of his achievement, Premat said the early criticism of his signing only made him more determined to succeed.

“I know that there was a lot of criticism since I signed until the first race at Sandown.

“But they (critics) make me stronger. I did everything possible and I don’t even scratch one panel on the car.”

Roland Dane has meanwhile affirmed on his team’s website that the Las Vegas-based Premat will be offered a deal to return next year.

Clarity on Premat’s other racing plans for 2017 will, however, need to occur before an agreement is reached.

“That’s the plan,” said Dane of whether Premat will return.

“He defied the expectations of the armchair experts and delivered in spades, as we knew he would.

“He is a first class operator in the car and out.

“It’s his call at this stage though, we’re waiting to hear his plans for 2017 and we’ll go from there.

“Nothing is confirmed yet.”

CLICK HERE for more from Premat following his maiden Supercars win on Saturday.