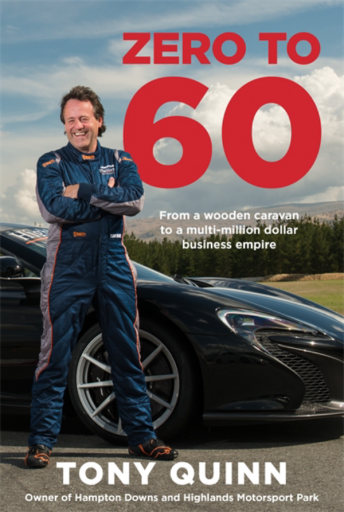 Growing up in a caravan to becoming a multi-millionaire, Tony Quinn’s rags-to-riches story is as fascinating as it is funny.

The story of Australian GT Championship owner and businessman par excellence Quinn as told to author Robert Tighe in Zero to 60 is both compelling and inspirational.

Much has been written about the Scottish-born businessman’s motor racing exploits in Australia and New Zealand but it’s his staggering journey told in its entirety for the first time that makes a captivating read.

Originally from Aberdeen in Scotland, Quinn, who turns 60 next year, is as canny as they come.

A grafter, toiler and doer, Quinn is self-made down to his bootlaces.

Zero to 60 recounts a thoroughly entertaining journey that has endured many twists and turns.

His life is told in an often amusing Scottish tone that perfectly sums up a man who has made it big in the business and motor racing worlds.

“To be successful in life you have to think positive and in motorsport, you’ll never win a race unless you’re truly convinced that you can,” says Quinn.

Home for the first 14 years of his life was a wooden caravan built by his father who had run a pet food business.

Little did he know that a return to his family’s pet food roots many years later would provide the foundations for a hugely successful multi-million dollar business which he sold last year.

Quinn had made the big time after emigrating to Australia in the 1970s with his wife Christina and young family.

The book highlights Quinn’s smart yet simple strategy in business and how he came to make the most of opportunities.

He says of supermarkets: “Supermarkets in this part of the world have far too much power. They treat suppliers like peasants and try to bleed them dry.

“What’s worse is you have to be nice to the retailers in Australia because they’re so important to your business.

“In America it’s the other way around.”

While largely focussing on his rise as an entrepreneur culminating with the multi-million dollar sale of his VIP Petfood business, to his purchase of Darrell Lea chocolates in 2012, there is steady stream of motorsport interspersed through the story.

Quinn began racing a Formula Ford in his teens in Scotland and proved quick behind the wheel but was smart enough to realise his time was better invested in the business world.

Once he became flush with a business empire built on pet food, Quinn would soon find himself plunging headlong into motor racing in a big way.

Instrumental in setting up the Porsche Carrera Cup Australia earlier last decade, Quinn’s stake in motor racing has seen him take the Australian GT Championship to new heights as its astute owner and also as custodian of the Aussie Racing Cars.

The creation of the highly acclaimed Highlands Park circuit at Cromwell in New Zealand’s picturesque South Island and purchase of Hampton Downs in the northern Waikato region of the North Island are recounted in detail.

Zero to 60 is as witty and as enchanting as Quinn’s canny and at times, unrefined larrikin veneer.

The book is available from all major book stockists in Australia and New Zealand, retailing at $35 AUD ($45 NZ).