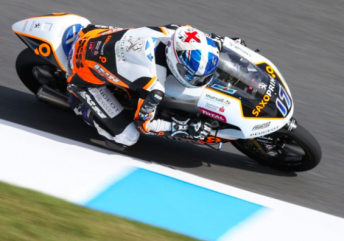 Moto3 rider John McPhee will remain in hospital for at least a week after further examinations revealed a lung injury following a frightening crash at Phillip Island on Sunday.

The Scotsman was transferred to The Alfred Hospital in Melbourne where he was diagnosed with a concussion and a broken thumb, which will require surgery.

However, the 22-year-old is now likely to miss the remaining two races of the season in Malaysia and Valencia after scans uncovered a pulmonary contusion, a bruising of the lungs, which will prevent him from flying for two weeks.

McPhee was briefly knocked unconscious in the crash which saw him lose control of his Peugeot before being struck by Andrea Migno at MG corner. Enea Bastianini was also involved in the pile-up and was taken to hospital.

All riders were initially cleared of serious injury following the crash.

“I’m feeling okay, bit stiff all over but I’ll be here in Melbourne for the next week or so as I’ve got a little damage to my lungs, so need to keep an eye on them before I fly,” wrote McPhee on social media.

“Hoping to have my thumb operated on in the next couple of days then be back to full fitness as soon as possible.”

Meanwhile, Bastianini has been released from hospital with a fractured vertebra and rib that could see him miss this weekend’s Malaysian Grand Prix.