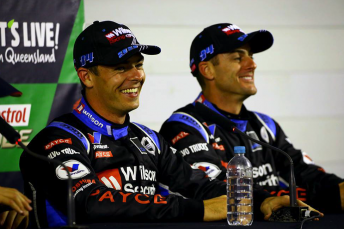 Scott McLaughlin couldn’t resist a cheeky dig at Jamie Whincup after pulling off what many have described as the pass of the season in the closing stages of Race 23 on the Gold Coast.

McLaughlin took the final podium spot away from Mark Winterbottom at Turn 11 with just over five of the 102 laps remaining.

The move saw McLaughlin’s Volvo slide down the inside of the Ford with all four wheels locked, narrowly avoiding the inside wall before scrambling for first gear at the apex.

The two cars made minor nose-to-tail contact as Winterbottom eventually turned into the corner in an overtake that clearly displeased Prodrive team boss Tim Edwards.

McLaughlin’s pass came two weeks after a dive-bomb from Whincup on the Volvo at Bathurst bumped the S60 off the road at The Chase, triggering nine days of controversy.

Asked to recount his pass on Winterbottom while sitting next to Whincup in the post-Race 23 press conference, a smiling McLaughlin mimicked Whincup’s “the move was on” defence from Bathurst.

“I knew that Frosty was going to use some fuel, he’d been saving until my gap had decreased,” he recalled.

“I had a really good run through the chicane and I lined him up into Turn 11.

“I went and he moved as I went, so I had to adjust the car and then brake which is what fried everything up.

“I slammed it down into first gear and managed to pull it up, which I felt was clean on my part.

“It’s pretty ironic that I was coming down the inside of some bloke after Bathurst.

“But it’s one of those things where I felt the move was on and I just had a go.” 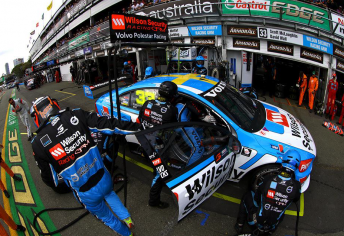 GRM took a gamble with its pit strategy

While the comment was greeted by laughter from Whincup and the assembled press, the question of Garry Rogers Motorsport’s pit strategy in Race 23 was a rather more serious matter.

The team surprised by leaving both of its cars out when the Safety Car was called on lap 16, putting them off-sequence with everyone except the #3 Lucas Dumbrell Motorsport Holden.

Others elected to double-stack cars in order to take fuel under the yellow which, even without the assistance of any subsequent Safety Cars, was able to get them home on just one more stop.

McLaughlin eventually shook out of the pitstop cycle in 10th before charging through the pack to take a second podium in as many days.

“The boys don’t reckon we were in our window as (evidenced by) some of the guys having to save fuel,” said McLaughlin of the strategy.

“They thought that the faster way was just pressing on.

“The strategy turned out pretty good and Dave (Wall, co-driver) did a good job to hold position until the end of his laps.

“I felt like we had the strategy right but the car was very fast too.

“It would have been nice to be closer to the Red Bull guys, but it was good to come through with third.”

Team-mates James Moffat and James Golding finished 12th after struggling for pace in the second half of the race.

Golding, like Wall, had stood up strongly amid the pressure of restarting at the front of the pack on 16-lap old tyres following the Safety Car.

Team owner Garry Rogers said post-race that he was proud of both co-drivers, heaping praise on Golding following a rough start to the Pirtek Enduro Cup.

“On a track where he has never driven and isn’t an easy circuit to get a handle on, he improved stint after stint,” said Rogers of Golding.

“His drive on Sunday from lap 16 to lap 34 is as good a performance I have seen from a rookie.”