Australian teenager Alex Peroni impressed during a wildcard appearance in the final round of the Eurocup Formula Renault 2.0 Championship at Estoril.

The 16-year-old produced a storming debut drive from 14th on the grid to fourth at the Portuguese circuit.

Peroni was initially promoted to the podium when third place finisher Robert Shwartzman was penalised for overtaking under yellow flags, before the original result was restored.

The fourth place finish arrived after a crash in practice saw the Monoplace Challenge Series leader suffer a hand injury.

A set-up gamble on a damp track hampered Peroni in the second heat as he drifted from 12th on the grid to 18th at the flag.

“I was really happy with Race 1, especially after not being able to do any quick laps in the second practice session,” said Peroni, who will contest the championship’s rookie test on Tuesday.

“It was a lot better result than I’d expected for my first Eurocup race meeting.

“But I was disappointed that I didn’t get the chance to do anything in the second race. We thought that a dry set up would work as the track dried, but it didn’t.

“I fought as hard as I could, but it was all I could do to keep the car on the track.

“The best part of this weekend was knowing that I can be competitive at Eurocup level.

“It’s a step up from the Monoplace Challenge that I’ve been racing in this year, but when you’re against tougher competition you just push yourself harder. 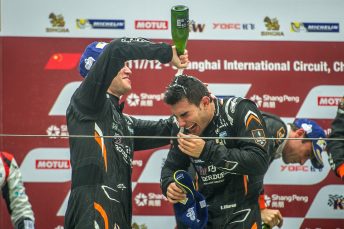 The FFF Racing Lamborghini Huracan pair finished seventh in Race 1 before wrapping up the title by coming home third in the final race of the season.

In the end, Amici and Liberati claimed the championship honours by 18 points from the Marchy Lee/Shaun Thong Phoenix Racing Asia Audi R8.

Title rivals Anthony Liu and Davide Rizzo saw their championship hopes evaporate after a retirement in the first heat followed by a sixth place finish in Race 2.

The Phoenix Racing Audi of Alex Yoong and Alex Au recorded a comfortable win in the opening race from the Absolute Racing Bentley of Adderly Fong and Andrew Kim.

Jeroen Mull and Marco Mapelli surged to victory in Race 2 from the Thong/Lee Audi. 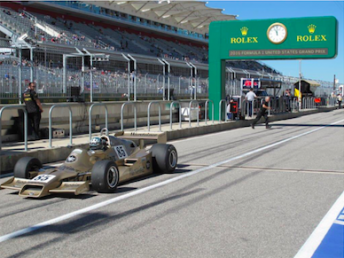 James Davison behind the wheel of the Arrows FA1

James Davison claimed the pole for the first of two Masters US races for historic Formula 1 machinery at the Circuit of the Americas.

Davison beat a big field to the top time on the undercard to the US Formula 1 Grand Prix in a 1978 Arrows FA1.

However the American-based Australian suffered mechanical problems in both races with a broken bolt in the gear linkage stopping him in Race 1 before another gearbox issue struck in Race 2.

Davison will feature in the Masters US races on the support bill at the Mexican F1 Grand Prix this weekend.