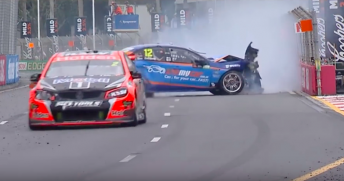 With a full stop finally put on Jamie Whincup’s Bathurst penalty, it didn’t take long for another controversial Supercars clash to take place.

Garth Tander’s tangle with Fabian Coulthard in Race 22 at the Castrol Gold Coast 600 proved the flashpoint of the weekend in Surfers Paradise.

A touch from Tander on the front straight sent the DJR Team Penske Ford into the left-side concrete wall at over 250km/h.

The stewards reacted swiftly to Tander’s actions, dealing the Holden Racing Team veteran a drive-through and a 10 place grid penalty for Sunday’s race.

Amid vigorous debate among fans on social media, fellow drivers such as Craig Baird strongly condemned the former champion’s actions.

The worst I’ve ever seen. Duty of care to fellow competitor zero.

The HRT was, however, unimpressed by the severity of the penalty, with boss Adrian Burgess later having what he described as a “robust discussion” with Driving Standards Observer Jason Bargwanna over the matter.

What do you think? Was Tander’s punishment fair, lenient or harsh?