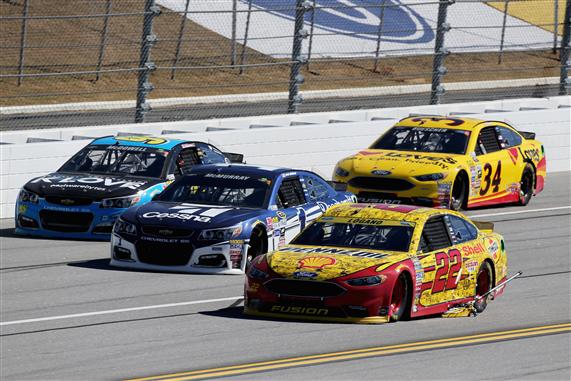 Not even a stuck jack could stop Logano

Joey Logano has kept the field at bay to score victory at Talladega Superspeedway, as the field for the Chase for the Sprint Cup was cut to eight.

Although Logano didn’t actually need to win at Talladega, he found the safest place was up front and out of any clashes that could occur in the pack.

His only issue coming during a pit stop when he left the pit road with the jack stuck underneath one side. He drove around the entire 2.66-mile track and returned to the pits where his crew removed it.

Then not even late cations in the race and an overtime finish could stop Logano who beat home an impressive Brian Scott, who scored his best-ever Sprint Cup series result.

“We got that track position and just hung onto it,” said Logano.

“It was fun racing there at the end.”

As good as it was for Logano, it was disappointment for his Penske team-mate Brad Keselowski who had an engine failure; the same infliction for Martin Truex Jr. Both missed the cut along with Austin Dillon and Chase Elliott.

Of note, Hamlin and Dillon tied for the final transfer spot. Hamlin’s better race result (3rd at Talladega) earning him a place to the next round as compared to Dillon’s sixth place at Kansas.