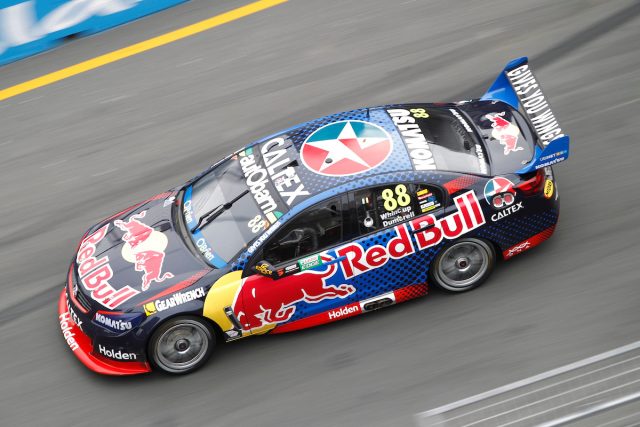 Jamie Whincup turned the tables on team-mate Shane van Gisbergen by topping qualifying ahead of the Top 10 Shootout for Race 23 at the Castrol Gold Coast 600.

Van Gisbergen set the pace in the 20 minute session ahead of the final green tyre run, with his 1:10.45s best putting him 0.13s clear of Whincup.

The Kiwi struck trouble on his final run however, losing his first lap to a kerb strike before running down the Turn 11 escape road on his second lap.

Garth Tander also improved late to be third in his Holden Racing Team Commodore but will take a 10 place grid penalty after the Shootout following his collision with Fabian Coulthard yesterday.

David Reynolds made it two top five qualifying efforts in two days with fourth ahead of Craig Lowndes, Will Davison, Mark Winterbottom and Chaz Mostert.

It was a mixed session for Erebus, however, as heavy contact with the Turn 11 concrete wall for Shae Davies is expected to see the team’s #4 Holden sidelined for the day.

The Volvos of James Moffat and Scott McLaughlin both leapt into the top 10 in the dying seconds.

Saturday front-row starter McLaughin later revealed that he’d tagged the wall in the beach chicane on his first run, interrupting his session.

“I hit the wall on my first run and bent the car,” he admitted.

“The boys did a great job getting it sort of straight so we could make the 10 but she was a bit second hand.”

McLaughlin bumped Michael Caruso from the Shootout, leaving the top Nissan in 11th.

All 26 cars started the session after an all-night repair for DJR Team Penske on Coulthard’s Ford.

The car was repaired in time for the start of the 20 minutes and eventually ended up 18th, just two places behind team-mate Scott Pye.

“Obviously we’re not quick enough, but if you’d told me yesterday afternoon that we’d be here for qualifying I would have said ‘you’re kidding’,” said Coulthard.

“The boys have done an awesome job. It steered straight and did everything I was expecting it to do, we just don’t quite have the speed.”

The Top 10 Shootout will get underway at 1125 local time.