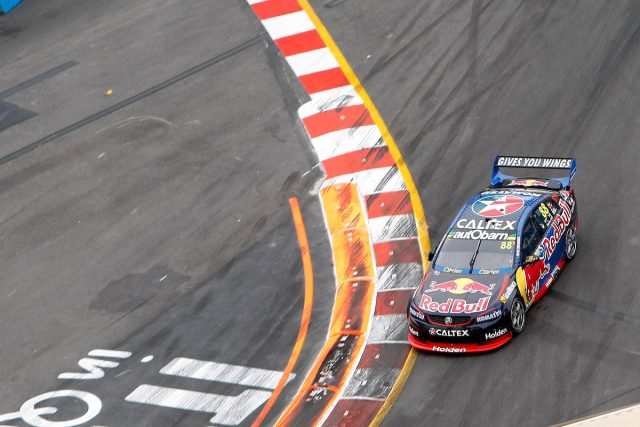 Jamie Whincup and Paul Dumbrell turned around a difficult Pirtek Enduro Cup campaign with victory in the final leg of the Castrol Gold Coast 600.

Putting a full stop on a tumultuous fortnight following another controversial Bathurst for the duo, Whincup led home team-mate Shane van Gisbergen to secure the win.

It marked the first endurance race win for Whincup and Dumbrell in two years after a series of near-misses.

“I was the co-driver today,” smiled Whincup, who trimmed Van Gisbergen’s championship lead by 12 points to 148.

“PD did 60 laps at the start that set the race up and I just finished it off.”

An early double-stack for co-driver Alex Premat put Van Gisbergen back in the pack, but it wasn’t enough to stop the Kiwi/French combo taking second and the Pirtek Enduro Cup.

Scott McLaughlin also charged through in the final stint after going off-sequence on strategy to take his second podium in as many days alongside David Wall.

As was the case yesterday, the intervention of the Safety Car during the early stages complicated strategy for teams.

Contact between Richie Stanaway and Jack Perkins put the Super Black Ford out of business at Turn 4 on lap 16 of 102, triggering the full course yellows.

Dumbrell led the bulk of the field to pitlane, including team-mate Premat, who dropped six spots while double-stacked behind the sister car.

The Volvos of James Golding and Wall elected not to pit, leaping from sixth and 10th to first and second respectively.

It proved to be a bold call from GRM as, with some major fuel saving in the second stint, the leaders all proved able to make it through on just one more stop.

The Kiwi made quick work of his rivals, making it to second by lap 84, at which point he was five seconds adrift of Whincup.

Van Gisbergen halved the margin over the next five laps before a bad sportsmanship flag for overuse of the kerbs saw the Red Bull team call off his charge.

McLaughlin began his final stint in 10th before charging through, taking the final podium spot with what was arguably the pass of the season on Winterbottom at Turn 11.

The Volvo slid down the inside of the Ford with all four wheels locked, narrowly avoiding the inside fence in the process.

Winterbottom also lost fourth to Lowndes in the closing laps, while Mostert too struggled in the final stint as he dropped to sixth.

Seventh proved a breakthrough result for Holdsworth and co-driver Karl Reindler after a horror run through the Pirtek Enduro Cup.

Those hurt most by the early Safety Car proved to be the Nissans, which were forced into three-stop strategies thanks to their higher fuel consumption.

Caruso led a portion of the race thanks to a long third stint before eventually finishing ninth, trailing Slade’s Freightliner Holden to the flag.

Van Gisbergen and Premat’s only threat for the Pirtek Enduro Cup, Will Davison and Jonathon Webb, struck a major obstacle when they had to stack in the first pitstop.

Pitting again under the yellow for a fuel top-up, the Tekno Holden restarted 22nd and eventually finished 13th.

The David Reynolds/Craig Baird Holden had started third, but finished down in 20th after an early hit from Baird on Aaren Russell netted a drive-through penalty.