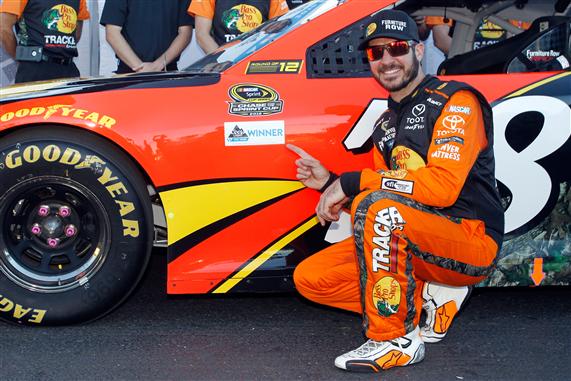 Martin Truex Jr. has taken the pole at Talladega, for what will be the final race to decide the Round of 8 in the Chase for the Sprint Cup.

Like Daytona, Talladega is a restrictor plate track where pack racing is the order of the day. Avoiding the big wreck will be crucial to all of those aiming to make it through to the next phase of NASCAR’s version of the playoffs.

“It’s definitely cool. You come here and you don’t really have a lot to say as a driver when it comes to qualifying,” said Truex Jr.

“Proud of the team, everybody in Denver, everybody here at the racetrack for their efforts. It’s awesome to be the fastest guy in town.

“We really haven’t qualified well at the restrictor plate tracks the last few years. Having speed is important. I really haven’t had a car at a plate track in a couple years that was really strong that I really could make moves with and try to get out front and lead the race quite often.”

Only Jimmie Johnson and Kevin Harvick are guaranteed a place in the next stage of the Chase, after winning the last two events at Charlotte and Kansas.

Technical inspections were intense prior to qualifying with Truex’s crew and the Joe Gibbs Racing Toyotas all having issues.

“They caught it in inspection and we were posted,” crew chief Cole Pearn told reporters.

“It wasn’t intentional by any means. There’s no way you would do it at Talladega. Why would you do it on one side and not the other two if you were going to do it on purpose?

“Simple stuff like that gets caught all the time … NASCAR said they would review it, but people make mistakes all the time. It wasn’t intentional.”

NASCAR confirmed that they will carry out further analysis following the race weekend.

“They had a jack bolt that we feel like didn’t meet the specifications in the rule book,” said Scott Miller, NASCAR VP of Competition.

“We’ll take it back to the R&D Center and go through our normal process like we do, analyze everything and decide what we’re gonna do. Because it is the playoffs, everyone has that heightened sense of everything.”

The three Joe Gibbs Racing cars of Kyle Busch, Denny Hamlin and Kenseth were pulled from the qualifying line just before their speed attempts. NASCAR officials said that they were investigating a potential issue with the boot lid and quarter panel area. With those issues remedied behind the wall, all three were allowed to qualify.

Reed Sorenson, who was required to make the field on the basis of qualifying time, posted an

David Gilliland failed to qualify for the 40-car field.