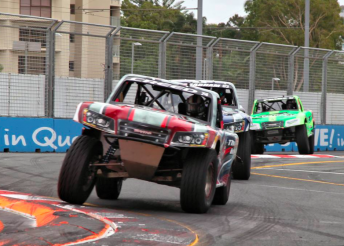 Sheldon Creed held off a spirited challenge from Matthew Brabham to win the final race of the Stadium Super Trucks Australian Series at the Castrol Gold Coast 600.

The 19-year-old American surged from the final row of the grid to take the lead on lap 7 by passing Brabham at Turn 3, following an entertaining dice.

American-based Brabham piled the pressure on Creed for the remaining laps but was unable to find a way through to the lead.

Creed defended brilliantly on the final lap to take the win by 0.4s from Brabham and Australian Dakar Rally champion Toby Price.

“It was pretty cool to win that one having started from the back,” Creed told Speedcafe.com.

Although he missed out on the win, Brabham thoroughly enjoyed the battle with Creed.

“It was a close race,” Brabham told Speedcafe.com.

“I was trying to keep it clean but it is so hard to pass on this track.

“It was great fun to be able to race that close with Sheldon. I didn’t quite get the win but I’m happy.”

The British-born driver landed awkwardly off a jump which saw his truck fire into the wall hard at the beach chicane, resulting in a series of violent spins. 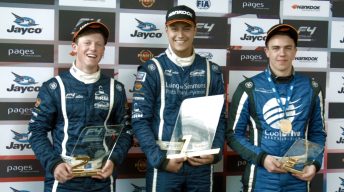 Harry Hayek claimed his third Australian Formula 4 Championship race win as he took the round honours for the final meeting of the season.

The Team BRM driver took the lead from newly crowned champion Will Brown on lap 4 before going on to take the chequered flag.

Hayek, who enjoyed a spell in the British Formula 4 Championship earlier this year, was unable to relax with Brown just a second adrift at the finish.

“We got two seconds (place finishes) and to win the last race was awesome. I’m stoked,” said Hayek, who took the round win from Brown.

The returning Zane Goddard and rookie Jack Smith retired from the race on the opening lap.

The Australian Formula 4 Championship will return next season.

David Sieders claimed the penultimate round of the V8 Utes Racing Series after officials were forced to abandon the final race of the weekend.

Sieders was lying second behind Nathan Pretty in Race 3 before the red flags flew on lap 4 when Cam Wilson sparked a seven car incident that blocked the track at Turn 13.

Wilson slid into the barriers on the exit of the corner after being hit by Peter Burnitt and was then collected by the chasing pack.

Danny Buzadzic, Bruce Oaklands, Nandi Kiss, Craig Woods and Maxim Erickson were all caught up in the crash.

With a lengthy clean up required, the race was canned which saw Sieders take the round victory by two points from Pretty.

Sieders leads the series standings by 89 points ahead of the final round at the Coates Hire Sydney 500 from December 2-4.