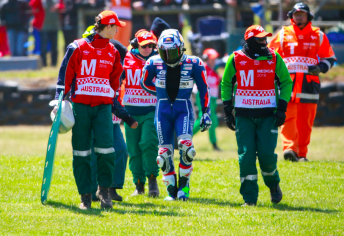 Enea Bastianini and John McPhee have both escaped serious injury despite a frightening crash which saw the Moto3 race red flagged at Phillip Island.

McPhee lost the front of his Peugeot through Lukey Heights on Lap 6, scattering the pack and taking down Andrea Migno and Bastianini.

Migno ran over McPhee and Bastianini was also run over by Jorge Navarro as he slid down the track to the MG corner.

Both riders were transferred to a hospital in Melbourne where they were cleared of serious injuries, although McPhee has suffered a broken thumb which may require surgery.

While initial reports stated that all riders were conscious when medical crews arrived, McPhee’s Peugeot MC Saxoprint team has recently advised that the Briton did lose consciousness.

“Currently @johnmcp17 is at the Melbourne Hospital for further checks because he was unconscious,” read a tweet from the team’s official account.

“He has a broken thumb and pains anywhere.”