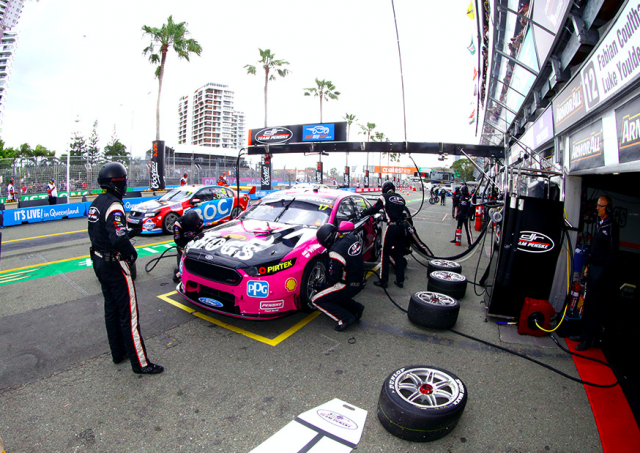 DJR Team Penske’s rough weekend at the Castrol Gold Coast 600 has ended with a fine and a points penalty.

The squad has been fined $3,000 and docked 30 Teams’ Championship points following Race 23 for “failing to ensure Car #17 was completely free of all hoses before leaving its pit bay”.

Occurring at the car’s first pitstop under Safety Car on lap 16, the incident saw Tony D’Alberto begin to drive away as the air spike was being hurriedly re-attached to the car.

“I moved off when the car hit the ground,” explained D’Alberto post-race.

“It was very unfortunate as I think we would have continued the early progress up the order.”

D’Alberto later had to make an unscheduled pitstop while the team fixed the car’s air hose coupling.

Primary driver Scott Pye eventually finished the race a lap down in 23rd.

Pye and D’Alberto were 18th yesterday after a throttle issue hampered progress.

“I guess this is really a weekend where circumstances beyond Tony and my control determined our results,” said Pye, who qualified 15th for both races.

“We were forced to stop three times today which hurt our track position.

“The Hog’s Ford was never quite dialled in the way we wanted but we were behind the eight ball in both races.”

As a team we have come so far but weekends like this remind us how far we have to go. #gc600 #VASC pic.twitter.com/EPGV0fXvLf