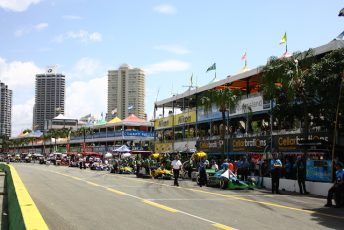 The screaming sound of American IndyCars has long fallen silent however the Castrol GC600 marks the 25th anniversary since motor racing came to the streets of Surfers Paradise.

After being courted by a consortium of Queensland business figures which included News Limited publishing ace Ron Richards and celebrated Gold Coast businessman Terry Robertson, CART signed up to open its championship in Australia from 1991.

On a track originally designed by Ron Dickson, the CART show ran rich on American-bred talent and ex-grand prix champions.

Its long distance sojourn would, in time, become a popular and important cog in the Indy season.

Although in its formative years, the event was sullied in the media when it was kicked around as a political football.

The amount of money the Queensland government was splurging on bringing the North American open-wheel show to its tourist playground became a sticking point in the public arena.

The following year, the great Emerson Fittipaldi famously swilled orange juice on the podium after winning for Team Penske. 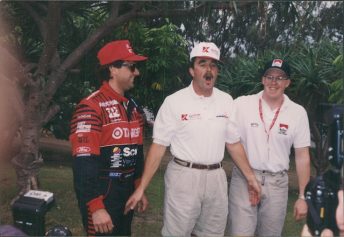 Michael Andretti, Nigel Mansell and Paul Tracy skylarking near the media centre in 1994

Despite a deal of colossal success including the 1993 race which saw the reigning Formula 1 champion Nigel Mansell claim the pole and the win in his maiden race in the series for Newman-Haas, the sport took several years before the annual political storm it generated would subside.

Mansell’s 1993 victory remains one of the biggest highlights in the history of the event when thousands of British fans and an international media throng numbering several hundred attended the race.

Having his rookie start that year was Robby Gordon, now the owner/driver of the high flying Stadium Super Trucks series.

“I came here in 1993 for the first of four years running in IndyCar and then obviously had a 10-year NASCAR career so I didn’t come back,” Gordon told Speedcafe.com. 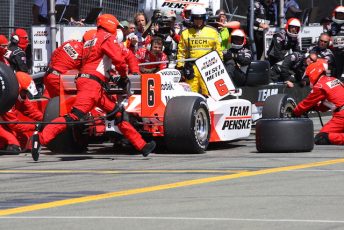 Ryan Briscoe pits on his way to winning the 2008 Gold Coast race, the non-points race for the Indy Racing League machines. It would be the final time IndyCars took to the Surfers track

“But we’re back here now with Stadium Super Trucks on the schedule which is a big deal for us.

“This is the Monaco or the Long Beach of Australia. It is a great race, a great place and great fans.”

By 1994 the V8s would make their first appearance on the undercard at the tourist mecca with John Bowe taking the event.

Team boss Dick Johnson harbours fond memories of the event although it was also the venue where he had one of his most forgettable experiences when in 1997 he and Bowe tangled.

It was the year before the race switched to its long-held October date after previously being run in March/April.

“I know the race inconveniences a few people but at the end of the day you have got to look at what it potentially does for the coast,” Johnson told Speedcafe.com.

“All of the footage out of here goes around the world. And what a spectacle the Gold Coast is and it does lot for the economy at the end. 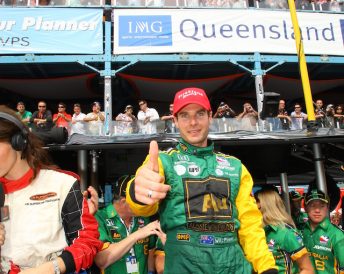 Will Power after landing on pole in 2007

“But as a race goes, it always produces. Like Bathurst, there is always something happening in this event be it good or bad.

“I raced here when we used the full 4.5km track and had some good memories here but at the end of the day I’ve had one of the worst times in my career here where Bowie and I came together.

“His version is different to my version of the event which drivers always have. And it hasn’t changed in the years since because I know how Bowie drives but we will gloss over that.

“But aside from that incident I have nothing but admiration for the race. It is a great event even though it is now on a shorter track it works.”

The big breakthrough for Supercars came three years after Johnson retired when in 2002 it was given full championship status for the first time and when it was promoted to equal billing with the IndyCars. 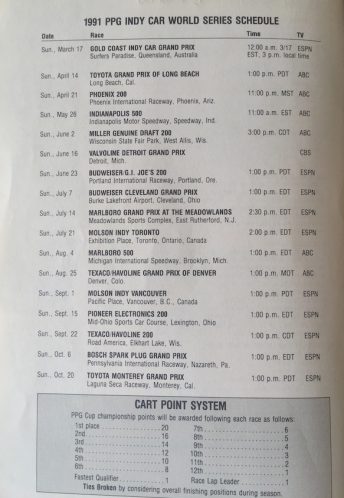 While the Surfers Paradise race grew to be the most successful on the calendar outside the unrivalled Indianapolis 500, signs of trouble within the American open wheel ranks were on the rise in the middle of the 1990s.

With the rival Indy Racing League being formed, CART continued but were locked out of its epic showpiece, the Indy 500.

Through these times the Gold Coast race continued to grow both in stature and in crowd.

However at the turn of the millennium, the signs were on the wall that Champ Car, as CART had become known, was living on borrowed time.

Its most successful outfit, Team Penske entered the IRL full-time in 2002 at the behest of commercial pressure, followed by the Chip Ganassi operation.

By 2008 the IRL consumed what was left of the teams after Champ Car filed for bankruptcy.

Later that year the IRL staged what would be its first and only race at Surfers Paradise with Ryan Briscoe winning the non-championship race for Team Penske.

The Queensland Government had sought out organisers of the A1 Grand Prix to replace the American single-seaters for 2009 in what was supposed to be a five-year arrangement. 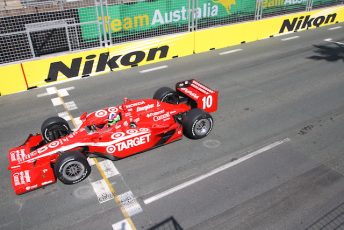 However just two weeks before the scheduled race weekend in October, the series went into liquidation causing a last minute rethink on what could replace the void that was left.

Former long-time Indy PR man and Speedcafe.com owner Brett Murray set about organising a collection of historic touring cars from David Bowden’s impressive collection which would in turn by driven by a group of legendary drivers.

For a makeshift show the legends laps plugged the void left by the demise of the A1 Grand Prix. 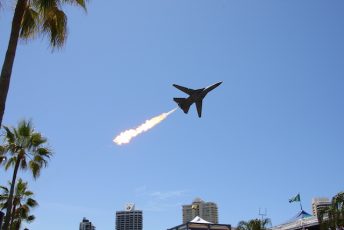 But under the prohibitive weight of picking up expenses for overseas drivers, the format was cancelled after 2012.

Since then the Gold Coast 600 has seen the implementation of the Pirtek Endurance Cup, which also incorporates the Sandown 500 and the Bathurst 1000 in a three-race component for long distance honours within the main championship.

Supercars chief executive James Warburton paid tribute to the history the event has created in its 25th anniversary.

“It’s an incredibly iconic event, completely different to every other event we have,” Warburton said.

“It showcases the Gold Coast to the world. Events survive because of what they deliver and this has delivered for a very, very long period of time.

“When Supercars stepped in after the Indy era and the no show of the A1 Grand Prix, it has been able to maintain the history. 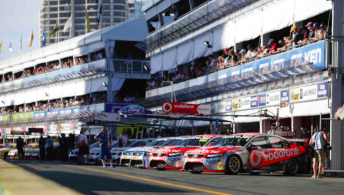 V8 Supercars stepped up in 2009 with four races

“We always have very tense negotiations with the government and we were delighted to get there for a second contract term (this year) with two different governments.”

While there has been rumblings of a possible IndyCar return to the Gold Coast, under the current structure of a shortened track and the prohibitive costs which are believed to number more than $10 million annually to bring the show from the US, it seems a longshot at best once the current contract ends in 2019.

V8 winners at the Gold Coast