Home » News » Supercars » Davies ‘devastated’ after crashing out of GC600

Davies ‘devastated’ after crashing out of GC600 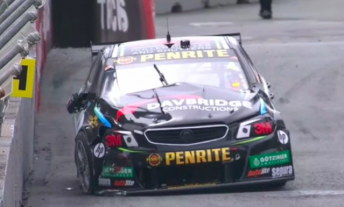 Davies comes to rest after his hit with the concrete

The #4 Erebus Holden has been ruled out of today’s race after Davies made heavy contact with the concrete at Turn 11 in the opening minutes of the session.

Damage to the right-front corner of the car’s roll-cage saw Supercars technical staff instruct the team not to attempt a repair ahead of Race 23.

“I just clipped the inside wall ever so slightly,” Davies explained to Speedcafe.com of the accident.

“It didn’t even damage the left-hand side, it’s just clipped the wheel itself.

“I’m physically fine but it just hurts to look at the car.

“I’m devastated for the whole team and the sponsors.

“It’s very upsetting but it’s the way it is unfortunately.”

Erebus general manager Barry Ryan said that the team will now focus on having the car ready for New Zealand.

Although all cars and equipment must be ready to be dispatched via airfreight by the coming week, Ryan downplayed the size of the task ahead.

“If it was life or death and we had to be out in the next three hours we’d have a good crack at fixing it,” he said.

“But Supercars declared that it’s too extensively damaged to repair in the time we’ve got.

“We understand that so we just have to focus on making sure it’s right for New Zealand.

“We’ve got James White (fabrication contractor) who has got all the equipment to fix these cars, so he’s already got a plan to be there on Monday afternoon when the truck arrives.

“We already had a plan to double-up truck drivers to get it back early and help our week, this just means there’s more work to do.”

Erebus will today focus on its Penrite-backed David Reynolds/Craig Baird entry, which qualified fourth this morning.

Now in its second meeting being engineered by former Holden Racing Team member Alistair McVean, the car has proven one of the quickest around the Surfers Paradise streets.

An early incident with Jonathon Webb and Dean Fiore saw the car taken out of Saturday’s 300km encounter, leaving its race-pace a major unknown.

“We’re still so new with this set-up that we’ll just have to see how it goes,” said Ryan.

“In Townsville when we had a strong car we struggled for tyre life, but we’ve improved a lot since then.

“I think we’ll be really strong and Bairdo is really comfortable in it which is a big thing as well.”