Coulthard/Youlden Ford to return for Race 23

Coulthard/Youlden Ford to return for Race 23 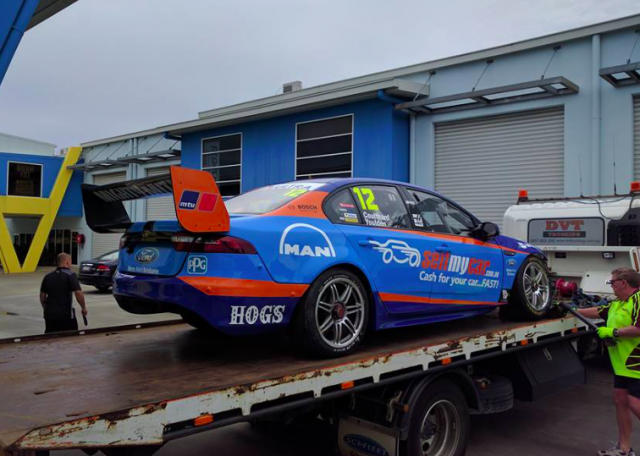 The #12 Ford leaving Pace this morning

Fabian Coulthard and Luke Youlden will be back on track at the Castrol Gold Coast 600 today after an overnight rebuild by DJR Team Penske.

Heavily damaged after a late-race hit from Garth Tander yesterday, the car was immediately dispatched to the workshop of chassis specialists Pace Innovations in nearby Yatala.

A crew of eight DJRTP team members and three Pace staff worked on the car through the night before sending it back to the circuit via flat-bed truck at 7:30am.

Although final preparations will need to be made at the circuit, the team is hopeful of cutting laps in qualifying from 0935 this morning.

DJRTP managing director Ryan Story paid tribute to the combined efforts of his team and Pace after overseeing the repair throughout the night.

Story said that the fix would not have been possible without Pace’s facility.

“From the initial checks it was determined that the most complicated aspect of the repair was going to be replacing the front rail,” Story explained to Speedcafe.com.

“That work was undertaken first by the Pace guys while our guys worked on repairing the subframe at the rear, which proved to be quite laborious.

“While that was happening our guys were working on panels and fitment, the engine and plumbing and ultimately the fuel cell, transaxle and ancillary system.

“Overall the task was quite complex and between the DJR Team Penske crew and Pace we’ve done a good job turning the car around.

“We’re fortunate that a local round enabled us to utilise Pace’s facilities and expertise.

“The repair has been thorough and we fully intend to race this car in New Zealand (the next event at Pukekohe).

“We could have performed a quick repair to get it back on track which would have then required a major rebuild after the weekend, but we’ve elected to do it properly from the start.”

Coulthard had been running fifth at the time of the incident following a strong recovery from 22nd on the grid.