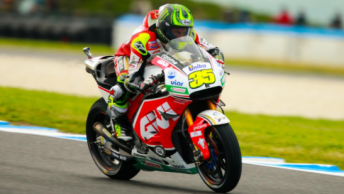 Cal Crutchlow was the beneficiary of a Marc Marquez error as he claimed a second career MotoGP race win at a dry Phillip Island.

Valentino Rossi scythed through the field early on and eventually finished second while Maverick Viñales also came from deep on the grid to complete the podium.

Pol Espargaro made an excellent start but led only as far as the fourth corner before Marquez took over.

Crutchlow had climbed to second position on Lap 4, by which time Marquez held a healthy advantage.

Once released, the LCR Honda rider started to close the lead before inheriting it when Marquez dropped his Repsol Honda at the Turn 4 Hairpin on Lap 10.

“I braked too late and instead of going a little wide I tried to keep the line and lost the front,” the newly crowned world champion Marquez said.

“During all the season I was very careful on the brake points – this GP I tried to forget. It was just my mistake.”

Rossi, having passed Aleix Espargaro just seconds earlier, was now second after starting back in 15th.

However, the Movistar Yamaha rider had no match for the Briton’s pace as Crutchlow ran away with a second win in six races.

“I’m really pleased for my team – the LCR Honda team has done a great job this weekend,” Crutchlow said.

“I was confident I could have won with Marc in the race.

“Honda have done a good job with our bike, there’s no doubt about that, and we now look forward to the last two races.”

Viñales made gradual progress before winning out in an entertaining late-race battle with Suzuki Ecstar team-mate Aleix Espargaro and Ducati’s Andrea Dovizioso.

Miller had bumped Nicky Hayden off at Turn 4, having spent the majority of the 27-lap affair in a scrap at the rear of the top ten.

Mike Jones (Avintia Ducati) collected a point in a solid effort at his second MotoGP race.

In Moto2, Thomas Luthi beat Franco Morbidelli to the line by just one hundredth of a second for his second straight win.

The Swiss moves into second in the championship, which Johann Zarco leads by an increased margin despite a lowly 12th place result after Alex Rins crashed out.

Alex Marquez failed to take the start due to injuries sustained in qualifying the day prior.

Marquez, who collided with Julian Simon after the latter ran out of fuel, was cleared of serious injury after precautionary scans in a Melbourne hospital and took part in the morning warm up.

A Marc VDS statement advised that “discomfort from his injuries” was the reason for the withdrawal.

Moto3 was marred by a scary crash which saw John McPhee and Enea Bastianini run over.

McPhee lost the front of his Puegot in negotiating Lukey Heights, his bike taking down Bastianini, before the two were struck by Andrea Migno and Jorge Navarro respectively.

Both riders were conscious and taken to the medial centre.

Brad Binder rode away with the 10-lap affair which followed a red flag and restart, while Australian Matt Barton was last of the finishers in 20th.

The next stop for MotoGP is the penultimate round of the season at Sepang, Malaysia, from October 28-30.