Will Brown clinched the CAMS Australian Formula 4 title with a race to spare as Simon Fallon took the spoils in the second heat of the Castrol Gold Coast 600 weekend.

After winning Friday’s opening encounter, Brown cruised to fourth place in the reverse grid race which was enough to secure his first national championship.

The Toowoomba racer has been the class of the field this season scoring six wins and a further six podium finishes from 17 races.

“We were hoping it didn’t go down to the last race and we could wrap it up today,” said Brown, who will receive his championship trophy at the FIA prize-giving evening in Vienna in December.

“To become the CAMS Jayco Australian Formula 4 Champion is great. We’re looking forward to the next race tomorrow and hopefully have a bit of fun.”

While Brown celebrated winning the championship, Dream Motorsport’s Fallon produced an impressive drive from pole position to take the win from Harry Hayek by 0.6s.

Hayek surged to second at the start as title contender Nick Rowe slipped to third where the pair remained for the entire race.

The 10 lap journey ended under yellow flag conditions after Jack Smith found the wall for the second time this weekend.

The championship will hold its final race of the season on Sunday at 0900 local time. 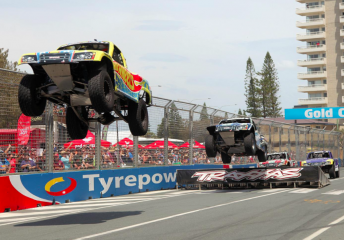 Gordon powered his way through the field from the back of the grid to clinch the victory behind the wheel of the truck usually piloted by Gold Coast racer Matt Mingay.

Mingay is absent from this weekend’s grid as he continues his recovery from an horrific Super Trucks crash at Detroit June.

Gordon was unable to relax in the closing stages of the race as Brabham piled on the pressure.

In the end, Gordon held on to take the chequered flag from Brabham and Sean Richardson.

Friday race winner Sheldon Creed dropped to sixth with steering issues in the final laps, having led at the halfway mark.

“I was comfortable but the biggest thing was not to make a mistake and we managed to do that.”

Brabham felt second was the best he could have hoped after being unable to match Gordon.

“I was pretty happy with that to be on the podium in front of my home crowd,” said Brabham.

“It was a crazy race and I had to avoid all the carnage but Robby (Gordon) was just too quick so that’s the way it played out.”

Paul Morris retired after the opening lap with an issue with his truck which suffered damage following a spectacular crash in qualifying.

The Stadium Super Trucks return for a qualifying session and final race on Sunday.

Ryan Hansford endured a bittersweet day by scoring victory in the opening V8 Utes heat before suffering a heavy crash which saw the second encounter end under Safety Car.

Hansford converted his pole position into the lead in what proved to be a chaotic start to Race 1 as Ryal Harris failed to get away from the front row.

The three-time series winner was hit by Craig Woods that forced a lengthy Safety Car period to clean up the debris.

The incident ruled Harris and Woods out of the race but both managed to escape the without serious injury, although their cars were ruled out of Race 2.

Once racing resumed, Hansford quickly opened up a healthy lead but as the laps ticked by he came under pressure from David Sieders.

However, the earlier Safety Car period shortened the race to eight laps, leaving Hansford to take the win from Sieders and Pretty.

Kim Jane took the spoils in a chaotic second heat from Pretty and teenager Mason Barbera.

Jane moved to the front on lap 7 with a spectacular move around the outside of long time leader Matt Nolan at the final corner.

Once ahead, Jane opened up a gap before taking the win under yellows, following a huge crash involving Hansford and Craig Dontas.

Third placed Dontas made an error at Turn 1 slamming into the wall which left the chasing Hansford nowhere to go, resulting in a heavy impact.

Both drivers climbed from the vehicles unscathed although racing was curtailed with three scheduled laps remaining.

Nolan dropped to 13th after receiving a five second penalty for contact with Barbera later in the race.

The V8 Utes return for a final 11 lap race on Sunday.