The 34-year-old combined with Shane van Gisbergen to score victory in the opening race at the Castrol Gold Coast 600.

It followed second place finishes for the duo at Sandown and Bathurst and leaves them with a commanding lead in the Pirtek Enduro Cup standings.

Premat adds a Supercars win to a resume that includes a Le Mans Series title with Audi Sport, an A1 Grand Prix title for Team France and victory in the iconic Macau Grand Prix.

“Winning a Supercar race has been my dream since I started here five years ago when I was with Garry Rogers,” Premat told Speedcafe.com.

“We (GRM) were in the next garage as Triple Eight when they were Vodafone and I was looking thinking ‘it will be nice one day if I can go there and win races with them’.

“My pace in 2012 (his first full season with GRM) was not fast because I was learning the whole process of the V8.

“In 2013 I would say I was pretty close to Scotty (McLaughlin) but didn’t have any luck to keep my seat.

“After that I was just trying to get a chance to win a race and today we have done it.

“I value this a lot. It’s very similar to when I won the Le Mans Series championship in 2008.

“In Europe they are not looking too much at Australia, but I know that it’s pretty important.

“It’s not only winning a race, but we won because we were both fast and we made it happen.” 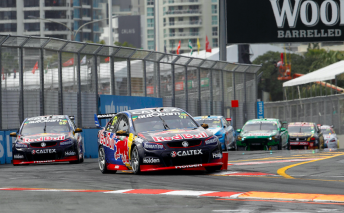 Premat started from pole and led every one of his 35 laps, but a 10 second time penalty for accelerating too early on a lap 28 Safety Car restart put the win in jeopardy.

The punishment required Premat to push hard during his second stint before Van Gisbergen took over on lap 35.

Unable to serve the penalty under the lap 35 Safety Car, Van Gisbergen’s pace in his first stint was so strong that he was able to take the punishment on lap 63 and return to the track with the effective race lead.

“I knew the rules but when they shutdown the lights (on the Safety Car) I thought it was accelerating to 120km/h but it was not,” Premat explained.

“I accelerated and saw a few cars followed but PD (Paul Dumbrell, co-driving with Jamie Whincup in the second Red Bull Holden) didn’t. I backed off straight away but it was too late.

“I knew it was going to be hard after that.

“Grant (McPherson, engineer) was saying ‘every lap like a qualifying lap’ and I pushed to be seven seconds ahead (before pitting under the second Safety Car).

“When we got the Safety Car I thought that was a shame, but the car was fast and Shane is very good in the traffic.”

The victory comes 12 months after Premat’s over-use of the kerbs at the beachside chicane damaged the Volvo he was sharing with Scott McLaughlin while leading the race.

Premat admits he was cautious through the chicanes today, but did what he had to in order to keep Dumbrell behind in the opening laps so that his car would not have to double-stack.

The track position proved critical as Dumbrell was forced to wait behind Premat at the first Safety Car and was then switched onto the least preferred strategy when the second yellow fell on lap 35.

“When Paul was behind me I was very careful on those tyre bundles because last year we lost the race for touching those,” he said.

“In the high-speed chicane I was very slow compared to Paul because I was saving the car for Shane.

“But I knew it was crucial to stay in front of PD for the double-stack.

“Across Sandown and Bathurst we were four times double-stacked, so we had to keep the track position.”