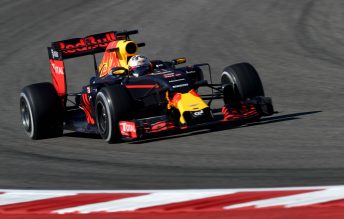 Nico Rosberg set the pace in Friday practice for the United States Grand Prix as Mercedes came under pressure from Red Bull at the Circuit of the Americas.

Mercedes once again proved the team to beat but the margin to the chasing pack was reduced following a strong showing from the Red Bulls of Daniel Ricciardo and Max Verstappen in both 90 minute sessions.

Rosberg posted the fastest time of the day when he clocked a 1:37.36s effort during a qualifying simulation on super soft tyres to top second practice.

Ricciardo produced a standout performance to lap within two tenths of Rosberg to claim second and split the Mercedes drivers in the session.

“It is one of our best Fridays for sure,” Ricciardo said.

“On our long run pace we looked like we were able match them if not be quicker. But I’ve said it before it is Friday, but it is nice to have a good Friday.

“It’s nice to start the weekend on the right foot. I don’t think we will have hours and hours of work ahead of ourselves tonight.

“Just a bit of fine tuning. We don’t have to search for too much at the moment.”

Reigning world champion Lewis Hamilton was 0.3s slower than title rival Rosberg on his qualifying run in Practice 2, although the Brit had previously topped opening practice with a time good enough for second overall.

Vettel received a reprimand following a visit to the stewards for failing to stay to the left of a bollard marking the entry to pitlane.

Max Verstappen was unable to match the speed of the sister Red Bull, settling for fifth ahead of the Force India duo of Nico Huldenberg and Sergio Perez.

Renault showed signs of improvement courtesy of Kevin Magnussen who was 1.8s off the pace in 12th position.

However, it proved to be a difficult day for Haas F1 on home soil as the squad were hit by a lack of pace and mechanical issues.