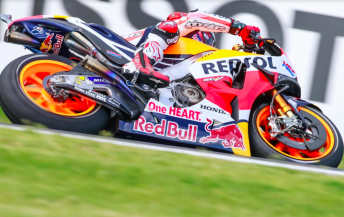 Marc Marquez has claimed pole for the Australian Motorcycle Grand Prix while Jack Miller will start from a personal best fifth on the grid.

With the Phillip Island Grand Prix Circuit remaining wet for Q1 after a downpour which saw Free Practice 4 halted for nearly 30 minutes, all 11 riders started the first quarter-hour session on wets.

Cal Crutchlow dominated that phase of qualifying, while Jorge Lorenzo snuck into second.

Yonny Hernandez looked set to bump the outgoing world champion after the chequered flag but fell at MG.

Rossi made a late switch to an intermediate rear but ran out of time to improve his position.

All 12 bikes advancing to Q2 started on intermediates but Marquez pitted immediately to change to slicks.

“It was a little bit difficult to make the decision because rain was coming,” said Marquez of the weather which ultimately held off.

“I said; ‘Okay, I take the risk,’ because the track was completely dry and then I did a few laps really fast.”

Crutchlow made a late change to slicks to take his LCR Honda to second on the grid, while Pol Espargaro (Tech 3 Yamaha) usurped his brother Aleix (Suzuki Ecstar) as they crossed the line together after the chequered flag.

The Spaniards denied Miller a maiden front row start, though the Marc VDS Honda rider was not completely disappointed with his efforts.

“It was definitely tricky conditions but we managed to keep it on two wheels and bring it home in fifth,” Miller told Fox Sports.

“(It’s) not where we wanted to be – I was pushing for a little bit more, a little mistake on the last corner sort of cost me my lap but I’m pretty happy with how the day’s gone.”

Jorge Lorenzo could only manage 12th after coming through Q1, while his Movistar Yamaha team-mate Valentino Rossi did not even make it that far and will start 15th.

In Moto2, Thomas Luthi secured pole position, while Remy Gardner experienced a fall on his way to 23rd during a crash-marred session.

In Moto3, Brad Binder secured pole in a frantic finish to qualifying.

The Spaniard was conveyed to the medical centre for treatment for thoracic and abdominal trauma.

Meanwhile, Nicolo Bulega took provisional pole when proceedings resumed, before being jumped by Binder and Fabio Quartararo after the chequered flag.

Australian wildcard Matt Barton has work to do to make the 107 percent cut-off in tomorrow’s warm up after qualifying 7.8s off the pace.