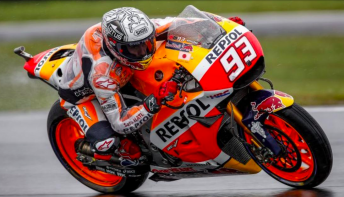 While new world champion Marquez topped the timesheet 0.05s faster than local hope Miller, Yamaha’s Valentino Rossi and Jorge Lorenzo struggled and will have to qualify through Q1.

Rain fell on and off throughout the hour-long session, which was extended after poor weather saw yesterday’s second practice abandoned.

Marquez took his Repsol Honda to the top just as light rain began to fall again after nine minutes, with stand-in team-mate Nicky Hayden moving to second shortly after.

Miller braved the drizzle with slick tyres on his Marc VDS Honda, moving up to second position just beyond the quarter-hour mark as most ran on intermediate rubber.

A spell of heavier rain followed again, before the Australian was one of the first to back on slicks as he set back-to-back fastest laps with just over 20 minutes remaining.

Marquez, however, regained the ascendancy shortly after as he set a trend of an intermediate front tyre and slick rear.

With the lap coming just as showers started again, Marquez’s time remained unchallenged as only a handful of riders, Lorenzo included, circulated on a wet track in the final 10 minutes.

The outgoing world champion had failed to make an impact on the timing screens at any point during the session, and he and Rossi both go into Q1 as a factory Yamaha pair for the first time ever.

While combined times from the first three practice sessions determine the start list for Q1, each rider set their personal best laps during FP3.