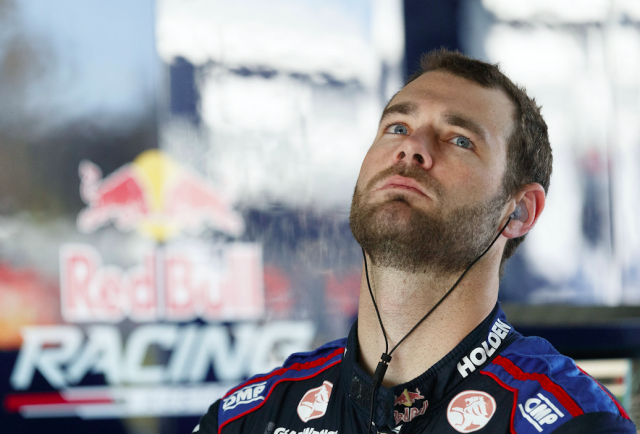 Craig Lowndes expects that the man who replaced him at Red Bull, Shane van Gisbergen, will hold off Jamie Whincup and secure a maiden Supercars crown this season.

Van Gisbergen enters today’s Race 22 of the season at the Castrol Gold Coast 600 with a 139 point lead over six-time champion Whincup.

The Kiwi took over the ascendancy with a second place finish at Sandown last month before pulling clear with another runner-up spot alongside co-driver Alex Premat at Bathurst.

Although Whincup remains a major threat with 900 points still available, Lowndes believes that Van Gisbergen has what it takes to stave off the advances of his fired up team-mate.

The veteran admits his own focus is now on securing third place, which would give Triple Eight an unprecedented trifecta.

Lowndes, who has not won the title since 1999, is 319 points behind Van Gisbergen after suffering a rare gear selector failure at Bathurst a fortnight ago.

“I think Shane will be hard to beat,” Lowndes told Speedcafe.com when asked for his title prediction.

“Unless he makes a mistake then he’s the guy to beat and he’s always loved the three circuits we’ve got remaining.

“It’ll be intense, there’s no doubt about that because Jamie never gives up, but Shane has just got to play it smart and not put it on the line too much.” Van Gisbergen has looked every bit the champion in recent months, finishing seven of the last nine races inside the top two.

He is yet to experience the pressure of a title decider, however, which is a battle that Whincup has been in the thick of every year bar one for the last 10 seasons.

“To be honest I don’t think it makes much difference,” said Lowndes of Whincup’s previous championships.

“Shane has been around long enough and is mature enough that he’ll take it in his stride.

“He’s been in big races where he’s been fighting for the lead and wins at the end. He’s matured now and I think he’ll be mentally prepared.

“Jamie won’t give up, there’s no question about that, but I don’t think the championships he’s got under his belt will give him any advantage.”

Lowndes has observed Van Gisbergen’s integration into the Red Bull team from his place in Triple Eight’s third garage this year and says he’s been impressed by the way the youngster has progressed.

“When he first joined Red Bull he struggled with the way the car was set-up,” said Lowndes.

“But he was still winning races when he wasn’t happy and he’s worked to progress the car with the team.

“He’s just become stronger as the year has gone on and it’s been impressive to see his consistency now.

“There’s never been a doubt about his speed, but it’s about being consistent every round and the Red Bull guys have given him a car where he can do that.”

Van Gisbergen topped Friday practice at Surfers Paradise and is today aiming for his third straight Saturday race win at the street venue.

Asked about the title battle ahead of this morning’s qualifying session, Van Gisbergen said he’s “pumped and excited” to be leading at this stage of the season. 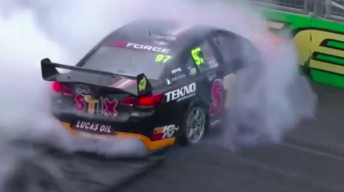 A maiden Supercars title would cap off a stellar year that has included a Bathurst 12 Hour win and a Blancpain Endurance Series title in McLaren GT3 machinery.

“I’ve got a pretty good opportunity here with a good team, a great car and a great co-driver,” he said.

“We’ve had a pretty good endurance season so I’m excited to just push on and get as many points as we can.”

Even if Van Gisbergen wins today, there will be no repeat of his spectacular burnout from 12 months ago.

A regular sight in NASCAR, the practice of performing a burnout parked nose-first against the concrete walls was banned by Supercars following last year’s event.

“I burned two holes in the ground so it is probably not a good thing to do,” he smiled.

“It is not good for the track so I understand why they banned it.”