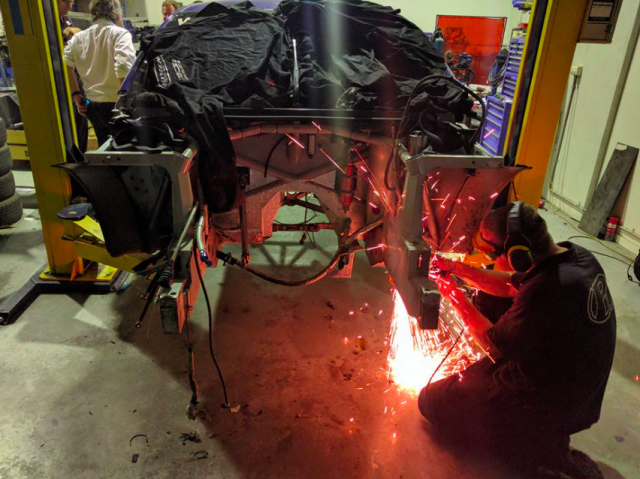 DJR Team Penske is working on Fabian Coulthard’s damaged Ford Falcon off-site in a bid to repair it for tomorrow’s concluding race of the Castrol Gold Coast 600.

The #12 Falcon has been sent to chassis builder Pace Innovations’ workshop at nearby Yatala where it is undergoing repairs following a high-speed crash in the closing laps of Race 22.

The team has confirmed the car sustained severe damage to the rear of the chassis after contact with the Holden Racing Team’s Garth Tander on the start/finish straight on lap 96.

CLICK HERE for more on the incident with Coulthard and Tander.

Speaking before the car left the circuit, DJR Team Penske managing director Ryan Story said that the team will do all it can to be on track tomorrow. “The car will go to Pace Innovations and until we pull the panels off the car we won’t know really for sure (the extent of the damage),” said Story.

“But certainly the rear of the car is damaged beyond repair.

“We can chop the back off and replace that and that is an easier proposition than replacing front chassis rails.

“We’ve done it before and if it’s achievable we will do it.

“The way it works within the rules, the car you enter for the weekend is the car you race.

“Despite having two spare cars in the workshop only 30 minutes up the freeway we can’t race one of those this weekend.

“It is disappointing but priority one is that Fabian got out of the car alright and to be sent at 250km/h is not how things should be done.”

Tander was issued a drive-through penalty and a 10 place grid drop for tomorrow’s 300km race as punishment for his role in the incident. The #12 DJR Team Penske Falcon before leaving the circuit