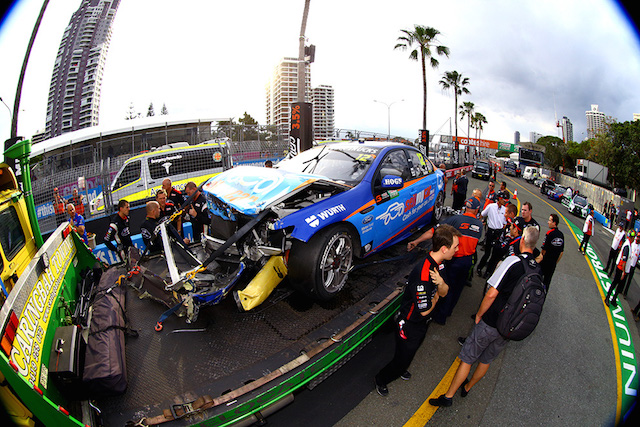 Fabian Coulthard has kept his emotions in check after being pitched into the wall following contact from Garth Tander in the closing laps of the opening 300km race at the Castrol Gold Coast 600.

Coulthard had to be helped out of his crumpled Ford after it made a heavy impact with the wall just over the start/finish line, carving off big chunks of concrete as testimony to the severity of the hit.

Escaping injury, Coulthard remained calm and collected when quizzed about the incident which saw Tander given a drive-through penalty and hit with a 10-place grid drop for tomorrow’s closing 102-lap encounter.

“You can’t take back time and you can’t do things for other people either,” Coulthard told Speedcafe.com.

“I think the vision speaks for itself and I don’t have to say too much.

“He was into me the whole of the last corner. On the way in, mid-corner, under throttle and there was no other way he would have got an overlap.

“Apparently from the in-car it’s pretty average on his part.

“Someone of his experience, championship winner, I kind of expected a little bit more from him but what can you do?

“It was a big hit. I’m just thankful the team have done all this development with the leg protection. They are always thinking and trying to make things better.

“They are learning unfortunately through other people’s misfortunes.

“We started 23rd and to race anywhere up there (fighting for fifth), it would have been nice to finally execute to that level.”

“Fabian changed lanes twice. I got to the left side of him and had overlap and he came across the front of me,” Tander said in a statement.

“The rules the way I understand it, once there is an overlap if you keep coming across in front of someone’s car when the passing car has overlapped then it’s at your own risk.

“And he kept coming across and came across quite hard and he went into the wall.

“I’m sorry to all the DJR boys and all the damage that’s happened to the car but ultimately the way I understand it is Fabian took himself out across the front of my car.”

HRT managing director Adrian Burgess said: “I obviously want to say we are all happy, especially Garth, that Fabian got out unscathed.

“That’s the first thing. No one wants to see cars smashed up and if we are at fault we apologise but in our view we’d gone to go pass him twice and he changed direction twice.

“We then went to go around the outside and we had a degree of overlap.

“The road turns to the right at that point and in our opinion we ran out of room and Fabian touched the front of our car with overlap and we all know what the end result was.

“Obviously, the opinion of the stewards at the time was different to that and maybe there is a slight overreaction because of the last event.

“GT certainly didn’t want to fence any cars but we certainly had overlap on him.

“It’s unfortunate it ended the way it did, but the main thing is he got out unscathed.

“We’ll discuss it further tonight with the stewards.”