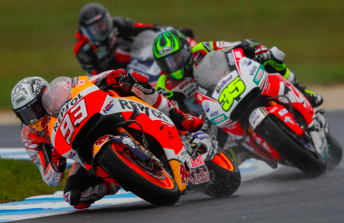 The Australian Grand Prix Corporation (AGPC) is reporting increased ticket sales for this year’s MotoGP round at Phillip Island despite its clash with Supercars.

This year the Australian round of the MotoGP world championship goes up against the Castrol Gold Coast 600, the final round of the Pirtek Enduro Cup.

While acknowledging the clash is unfortunate for both events and Australian motorsport enthusiasts, the AGPC remains confident its event will be largely unaffected.

CEO Andrew Westacott says ticket sales are 10 percent up on last year with a 90,000 three day crowd expected at the Victorian circuit.

The rise of Australian rider Jack Miller has been listed among the reasons for the increase following his breakthrough win at Assen in June.

“Ticket sales are strong and are up about 10 percent on last year,” Westacott told Speedcafe.com.

“I think the increase is due to three reasons. We have put a lot of effort in to retention of the crowd from last year by making sure they had a good time, which makes their decision to come back easier.

“The fact the championship was sewn up (by Marc Marquez last weekend) has had no affect on ticket sales as people see this as an opportunity to view these guys in an unbridled manner.

“Also last year’s race was an absolute classic and it is something many people haven’t forgotten.”

The clash has provided a challenge for television networks with MotoGP and Supercars races taking place at the same time.

Network Ten holds the free-to-air rights to both categories and will host the Castrol Gold Coast 600 on its primary channel while sister station ONE broadcasts the MotoGP.

“I think ultimately world championships take precedence in the setting of world calendars,” added Westacott of the clash.

“It is not ideal and it would be better if they weren’t on the same weekend but it doesn’t affect attendances.”