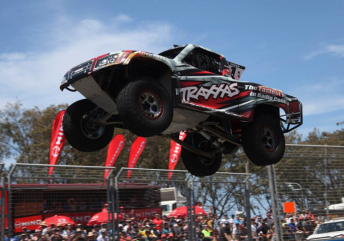 Sheldon Creed scythed his way from the rear of the grid to win a dramatic Stadium Super Trucks opener at the Castrol Gold Coast 600.

The American racer hauled himself through the 12-car field before eventually taking the lead on lap 7 after a competition yellow was called early to repair barriers moved by Craig Dontas.

Once in front, he produced a string of fast laps to take the chequered flag by 12.1s from P J Jones, who had previously raced the circuit in IndyCar in 1997.

Matthew Brabham produced one of the stand-out drives to claim the final spot on the podium from the back row of the grid.

The Australian ended the race in spectacular fashion with a wild trip over the final jump on the start/finish straight as he tried to snatch second spot.

“It was tough to get through traffic,” Brabham told Speedcafe.com.

“Everyone was just too wide, things were flying everywhere.

“After the competition yellow was thrown early on, everything was spaced out by then and everyone was in their own race after crashing into each other.”

Stadium Super Trucks return to the circuit on Saturday with a qualifying session before a 12 lap race. 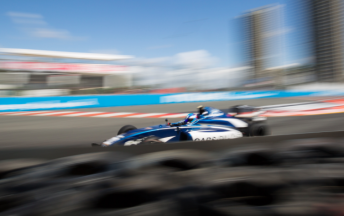 Will Brown edged closer to wrapping up the CAMS Australian Formula 4 Championship after taking victory in the opening race of the weekend.

The Toowoomba racer dominated the proceedings from pole position after fending off an early challenge from Harry Hayek on the run to the first chicane.

Once he settled into his rhythm, Brown opened up a healthy lead before the Safety Car was deployed after Brenton Grove and Jack Smith both found the wall in separate incidents.

The interruption set up a grandstand finish although Brown held his nerve to edge Hayek to the chequered flag, while title contender Nick Rowe settled for third.

The victory has seen Brown open up a 45 point lead over Rowe with two races of the season remaining.

“In the last couple of laps, Harry put in some good times so I had to push pretty hard to get the win,” said Brown.

“But looking at the championship again, it puts us one step closer.”

Formula 4 returns to the Gold Coast street on Saturday for a second 11 lap heat at 1010 local time. 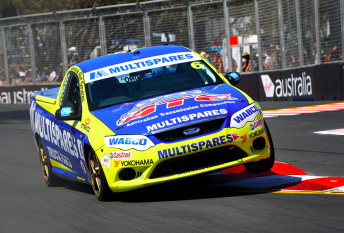 Title contender Ryan Hansford has secured pole position for the penultimate round of the V8 Utes Racing Series.

The Multispares Racing Ford driver edged three-time series winner Ryal Harris (Ford) to the all important pole by 0.05s in the top 10 shootout.

The earlier part of qualifying, which determined the top 10 for the shootout, was red flagged with two minutes remaining when Jeremy Gray made heavy contact with the wall at the Turn 1 chicane.

Peter Burnitt was absent from qualifying after suffering a high speed crash at the Beachside chicane, which severely damaged his Falcon Ute in Practice  2.

The V8 Utes Series will host two races on Saturday with the first heat scheduled to begin at 0830 local time.