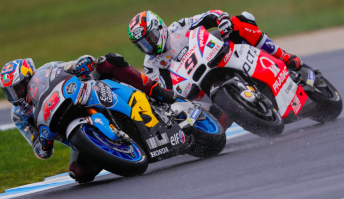 A revised scheduled has been put in place for Saturday which will begin at 9am local time, an hour earlier than previously planned.

Third practice for MotoGP and Moto2 has been extended from 45 to 60 minutes.

Australia’s Jack Miller emerged as one of the beneficiaries of the challenging conditions as he posted the third fastest time in opening practice.

However, the Marc VDS Honda rider admitted it was the right decision to abandon Practice 2.

“I’ve got to say the conditions were atrocious today, so firstly I want to say thanks to the Australian fans who still came out and supported me,” said Miller.

“We got out on track this morning and it wasn’t too bad in terms of learning something for the rain set-up, but this afternoon it was far too wet and dangerous.

“It’s a shame we couldn’t put on a show this afternoon but it was the correct decision to cancel the session because we simply can’t ride in those conditions.

“Hopefully for everybody’s sake the weather is better tomorrow and if practice and qualifying is wet then I’m confident I can be strong and do a good job.

“I felt I had good speed in the wet this morning and I don’t think missing two dry sessions will hurt us too much if it is dry tomorrow.”