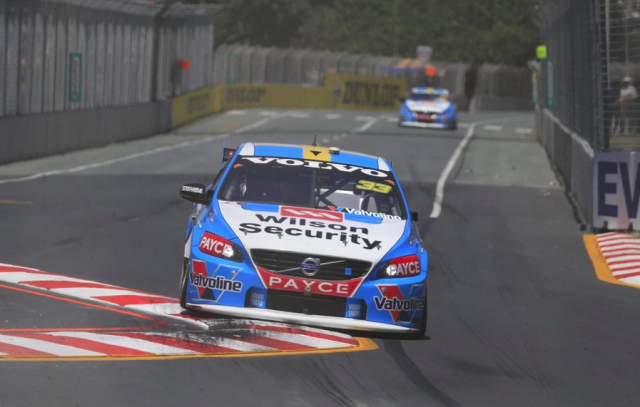 Scott McLaughlin has rebounded from his Bathurst disappointment by topping opening practice at the Castrol Gold Coast 600.

The Volvo driver, who was caught up in the late-race Jamie Whincup controversy at Bathurst, edged Shane van Gisbergen to the quickest time.

McLaughlin recorded a 1:11.32s after the chequered flag fell at the end of the 30 minutes.

Supercars Championship leader Van Gisbergen was 0.09s adrift in second having in turn moved to the top with just 30 seconds on the clock.

The speed comes after resurfacing of several sections of the street layout, including at the Turn 1 and beachside chicanes.

As ever at Surfers Paradise, drivers spent the opening session getting used to the combination of electronic sensors and tyre bundles in the chicanes.

The start of the session was delayed by 13 minutes as officials repaired damage to the Turn 10 apex kerb which occurred during the preceding Carrera Cup session.

“The resurfacing they’ve done here is really good and the kerbs are the best they’ve been,” reported Van Gisbergen.

“We’ve still got the sensors but the tyres are self-restricting, so it’s really good.

“The resurfacing should mean you can pass now into Turn 1 because you’re not so grip limited.”

Reynolds meanwhile stressed the fine line that drivers must tread in carrying speed through the chicanes.

“I had a few kerb strikes but it’s just seeing how much you can take the piss,” he said.

“It’s an imaginary line and if you err on the side of caution you’re a bit slow but if you take the piss and avoid the kerb strikes you’re up the front somewhere.”

Three 30 minute Supercars practice sessions will be held today, with the second for co-drivers only starting at 1345 local time.