McConville calls for redress rule to be abolished

McConville calls for redress rule to be abolished 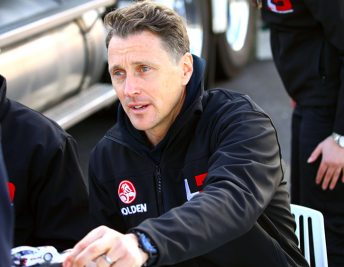 The option to ‘reposition’ behind another driver after contact has been thrust under the spotlight following a dramatic end to the Supercheap Auto Bathurst 1000 that saw Jamie Whincup, Scott McLaughlin and Garth Tander clash while the Red Bull driver was seeking to redress with the Volvo.

McConville believes the option to avoid a penalty by redressing has too many grey areas for drivers to comprehend during races and confuses the spectacle for fans.

Set to be debated in the drivers briefing ahead of this weekend’s Castrol Gold Coast 600, McConville has warned the rule has the potential to cause a big accident on the narrow Gold Coast streets.

“I think the best way to fix this is to abolish the redress rule,” McConville, who sits third in the Enduro Cup standings alongside Nick Percat, told Speedcafe.com.

“There seems to be so much confusion as to when and how to redress.

“At Sandown it wasn’t a spectacle when Shane van Gisbergen slowed for half a lap to complete a redress.

“I think if you make a mistake and you knock someone off the road you should get a penalty and play on.

“If there was no redress rule the cluster at Bathurst wouldn’t have dragged on as long as it did.

“If you tap someone wide at the Gold Coast it is going to be dangerous here to redress it. It will cause another accident like we saw at Bathurst.

“It is very hard to change the rules halfway through the season, but the sooner they drop the redress ruling, the cleaner the racing will be.”

The redress rule, however, has divided opinion amongst drivers in the paddock.

Holden Racing Team ace Tander has no qualms with leaving the option to redress but feels further clarity is required in the wake of the Bathurst clash that cost him a shot at victory.

“As it is still in its infancy there is always going to be a few clarity issues but what we saw at Sandown with driver redressing safely is the way it should be done,” Tander told Speedcfe.com.

“What happened at Bathurst was not the way it should have gone down.

“I think we are after a bit more clarity in terms of what is expected from us as a driving group to understand the best way to achieve the repositioning.”

Volvo driver McLaughlin says he is also behind the redress rule, but echoed Tander’s thoughts with regard to eliminating grey areas in its interpretation.

“I understand it fully and there is a slight grey area which is kind of confusing, but it is hard to explain,” McLaughlin told Speedcafe.com.

“I’m sure we will sort a few things out over time but I think it l has been a good thing overall.

“But there have been a few incidents where you think it is a redress and vice-versa. It is always hard when the race is going to make a call.”

Meanwhile, Percat has suggested the ruling is perfectly clear in its current form.

“The redress is extremely clear I’m not sure what Jamie (Whincup) was trying to achieve by redressing it on the exit of a corner,” added Percat.

“I think if you arrive at an apex with the rear wheels locked and elbow someone out the way, then I think we are lucky to have that free kick option to redress.

“Last year if you punted someone off you knew you would get a drive-through or a 25 point penalty.”