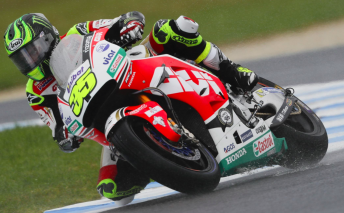 The LCR Honda rider was quickest in the opening practice session held in wet conditions at the Victorian circuit before the weather worsened in the afternoon.

Organisers delayed the start of the second 45 minute practice session to allow the track to dry before green flags eventually flew.

However, torrential rain returned 15 minutes into the run, bringing out the red flags with the session ultimately abandoned due to the dangerous conditions.

A track inspection was completed at 1645 local time where it was confirmed that track running would be curtailed for the remainder of the day.

As a result, Crutchlow’s 1:40.95s set before the rain intensified midway through the first session proved to be the fastest time of the day.

Yamaha’s Valentino Rossi ended the session second just 0.041s adrift the Brit, although the nine-time world champion’s best result was scrubbed due to a technical infringement.

Rossi exceeded the stint length on the super soft wet tyre imposed by Michelin, which dropped him to 20th in the results.

The Italian will now need to produce an impressive display in Saturday’s third practice to ensure he secures a spot in Q2.

Pramac Ducati’s Danilo Petrucci inherited second spot while Australia’s Jack Miller finished third as he made the most of the tricky wet conditions.

The Assen GP winner was half a second adrift of Crutchlow aboard the Marc VDS Honda.

Australia’s Remy Gardner put a dramatic week behind him to finish 10th in the only practice session for Moto2.

Gardner’s appearance at the event was placed in doubt after being detained by Japanese police following an alleged road rage incident that saw his father and 1987 500cc world champion Wayne Gardner arrested.