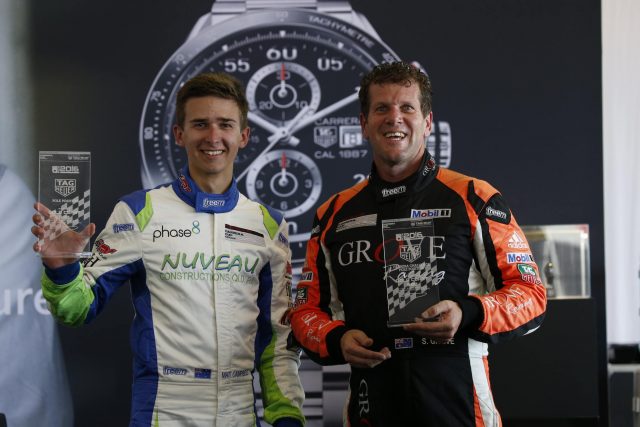 Campbell and Grove with their pole awards

Matt Campbell has set a new standard in the Carrera Cup with his seventh pole of the season heading into the final round of the series on the Gold Coast.

The only time in the Porsche one-make series Campbell has missed the pole this season was at the opening round in Adelaide.

His effort eclipses the previous record established by Jim Richards in 2004.

In a sometimes chaotic run, times tumbled as the 20-minute session saw a number of drivers pushed to the edge and over.

Fraser Ross stopped on track after contact with the concrete, while two wild spins at the Beachside chicane saw both Stephen Grove and Tony Bates facing the wrong way.

Bates limped back to the pits after sideways contact with the kerbs saw the tyre pop off the rim.

Through all of this Campbell sprung to the top, while championship contender Alex Davison looked set for a front-row start before a late surge from Michael Almond saw the Clipsal round winner set the second-fastest time.

Grove recovered from his earlier mishap to set the quickest time in the Tag Heuer Carrera Challenge.

Officials have also confirmed that after further medical examinations, Scott Taylor has been cleared of any leg fractures. Taylor and Shane Smollen are out of the weekend’s racing after crashes in the practice sessions.

Nick McBride is expected to make the starting grid for the first race set down for 0905 on Saturday morning.

VIDEO:Campbell and Grove speak after qualifying