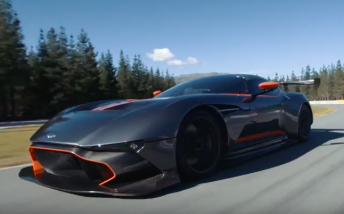 The Triple Eight Supercar driver will pilot the limited edition Aston Martin as part of a stellar support bill for the inaugural Australian Endurance Championship Hampton Downs 101 at the newly reconfigured near Auckland, New Zealand.

One of 24 examples worldwide and the only one in the Southern Hemisphere, the Vulcan is powered by a 7.0 litre V12 that puts out over 800bhp, capable of pushing the 1350kg weapon beyond 320km/h.

The AUD$3.7 million bespoke track-only supercar is the highest priced production car to be sold in New Zealand.

Lowndes’ demonstration is among an array of attractions to mark the official launch of the upgraded 3.8km circuit.

The opportunity to steer the car comes after both Lowndes and Triple Eight Supercars team-mate Shane van Gibsergen had to forgo drives in the GT races in order to focus on their Supercars duties.

Garth Tander and Michael Caruso are the only Supercars full-timers that will line-up for Australian GT’s trips to Hampton Downs and Highlands Park, which takes place either side of the touring car event at Pukekohe.

“Originally Shane and I both wanted to go over and do the races, but where we are in the championship Roland (Dane, Triple Eight team principal) wasn’t too keen on us racing,” Lowndes told Speedcafe.com.

“So I spoke to Quinny and said I still wanted to go over and be part of proceedings in some way.

“I’m honoured that Tony Quinn is trusting me to drive his Aston Martin Vulcan.

“I know there’s only 24 of them in the world so I better make sure I get it back to the pits in one piece!

“I can’t wait to put it through its paces.”

Earlier this week organisers confirmed a 34 car grid for the Hampton Downs 101 which features Supercars drivers Garth Tander and Michael Caruso alongside a vast range of GT3 machinery.

Australian GT will be supported by the Central Muscle Cars, GTRNZ and the Aussie Racing Cars.