Brad Jones and Adrian Burgess have retained their seats on the Supercars Board and Commission following today’s Annual General Meeting for the Supercars teams.

Jones was re-elected unopposed for a further two-year stint as a team representative on both the Board and Commission.

The former driver has been a fully fledged Board member since 2010 and sits alongside Triple Eight principal Roland Dane as one of two team representatives.

Walkinshaw Racing managing director Burgess was meanwhile re-elected to the Commission, which he joined on a temporary basis in July to take over from ex-Tekno boss Steve Hallam.

Burgess’ position is that of an alternate member, taking part in all discussions but only voting when any of the three permanent team representatives – Jones, Tim Edwards and Todd Kelly – are absent.

Englishman Burgess beat Garry Rogers Motorsport’s Barry Rogers in the ballot for the seat, which is voted on by each of the team owners.

Supercars’ Commission was broken away from the main Board in 2011 to focus on the category’s racing rules, regulations and formats. 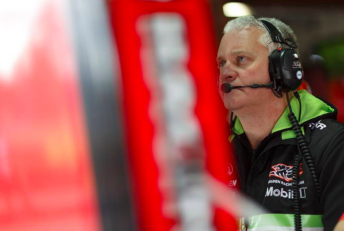 “It’s been good to see and feel first hand how the Commission works and that your team hat is left at the door,” Burgess told Speedcafe.com following his re-appointment.

“Everyone is putting in their experience and opinion for the good of the sport. It’s not led by people’s personal agendas.

“The motive is to improve and when we have issues like Bathurst we must make sure we can protect ourselves and put things in place to stop situations like that happening again.

“That starts with looking at how we apply and write the rules, how complex our rulebook is and whether we’re overly complex.

“All those things are being discussed.

“It’s good to be playing a part in how we go racing together.”

Jones says he was eager to continue to play his part, despite the time that the positions command.

“It takes up a lot of time but I don’t feel like my work is done yet,” he told Speedcafe.com.

“Since I stopped racing it has helped stimulate the business side of my life.

‘I enjoy my involvement in the race team (BJR) but I also find working with the Board and all the teams rewarding.

“If you are going to be in this position I feel you need to put your heart and soul into it and that’s what I do.

“I talk to all the team owners as often as I can and represent the business as best I can.

“I’m very grateful that the business has decided to re-elect me unopposed.”