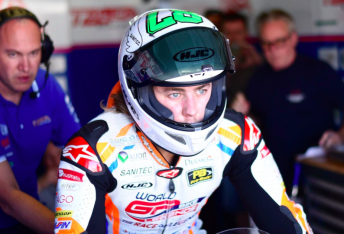 Remy Gardner is set to contest this weekend’s Moto2 race at the Australian Grand Prix after being released by police in Japan.

The 18-year-old and his father Wayne Gardner were detained by Japanese authorities after being caught up in an alleged road rage incident at Motegi last Sunday.

Reports from Japan claim Remy Gardner was driving when his vehicle made contact with another car which sparked an altercation involving the 1987 500cc world champion Wayne Gardner and three men.

The incident appeared to threaten Remy’s involvement in the Moto2 class with countryman Ant West tipped to replace the young Aussie.

However, it has now been revealed that the teenager has been released by police and is travelling to Phillip Island.

A statement released on behalf of the Moto2 rider confirmed he has avoided any charges relating to the road rage incident.

“Despite recent media speculation and rumour, Remy Gardner is currently en-route to Phillip Island where his intention is to ride in the upcoming Moto2 race in front of his home fans,” read the statement.

“In response to the stories circulating in the press and on social media, he has not been charged with any offence relating to a road rage incident that occurred in Japan and looks forward to completing the season with Tasca Scuderia Racing.”

Meanwhile, it has been confirmed that Wayne Gardner, who has been held in a cell since the incident, has received consular support from Australia.

“The details of this incident are being reported, but we’ve not been able to verify them. But we are continuing to provide whatever support we can while he is detained in jail.”