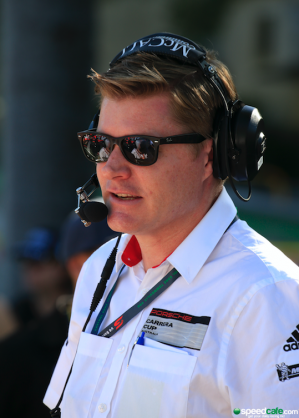 A raft of initiatives have been announced ahead of the 2017 Carrera Cup season, headlined by a round in Sepang, Malaysia and the introduction of an Endurance Cup.

CLICK HERE for Speedcafe.com’s news story on the changes.

SPEEDCAFE: Kurt, sending a full field of cars to Sepang is clearly a significant investment from Porsche Cars Australia. Why do it?

KURT SAKZEWSKI: It reinforces the global nature of the Porsche Carrera Cup program.

In Europe it’s common to see different markets do joint rounds but with the tyranny of distance it hasn’t happened often down here.

Carrera Cup Asia was bold enough to step up and bring their competitors to Sydney this year and we decided it was only right that we reciprocate.

It’s not the sort of thing that we’ll do every year, but a lot of what we do is based on a three-year cycle, which matches up with the model life of the car.

It’s about creating variety and I think that if you do it every year it just becomes another event which then doesn’t necessarily justify the amount of cost and work involved.

SPEEDCAFE: Did you have multiple options? Why did Sepang shake out as the place to go?

SAKZEWSKI: Sepang was at the top of our list from the start due to the nature of the circuit.

Also Kuala Lumpur is an attractive location and preferable to a new venue that perhaps isn’t quite on the radar yet. 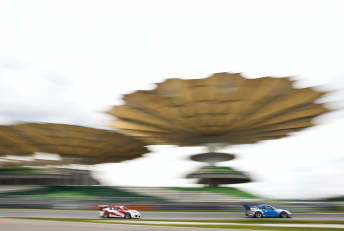 We also had to keep in mind the availability of dates and how it would fit in both calendars.

It will be an 11 or 12 day each way trip via sea freight, which we’re working with Gibson Freight on.

SPEEDCAFE: Did you look at trying to join them at any of the F1 events they do?

SAKZEWSKI: It’s nigh on impossible. Formula 1 is very tough to get onto for support categories.

If we went and just became part of their event it’d be a very expensive option and logistically not possible to have all the cars together.

To have two different Carrera Cup programs on the one weekend wasn’t going to be entertained by a Formula 1 promoter.

We were fortunate to be able to do that with Supercars this year, but with Formula 1 there’s only two or three support categories and those spots are well guarded by those who have them.

We never really aimed for that because we knew it wasn’t going to be a successful avenue.

SPEEDCAFE: You’ve rolled out a raft of other initiatives as well, including the chance for Australians to race in the Singapore Carrera Cup Asia round.

Are you having to be more innovative with the series to combat the level of interest in GT3 racing?

SAKZEWSKI: To be honest a lot of it is just about making people aware of things that are already in place with Carrera Cup.

You’ve always been able to drop into other Carrera Cups as a guest starter if you’re a competitor in your own market, subject to availability of cars.

Not many have done it in the past and when they have it hasn’t really had a lot of visibility back home in Australia, so others haven’t understood how easy and accessible it is.

That was some feedback we had from our competitors at the start of the year when we told them about the opportunities that already exist.

In the past people have been content to just keep doing what they’re doing here in Australia, but now we’re seeing the globalisation of categories.

That includes GT3, where drivers can race in Australia and then go and do Sepang or Dubai or whatever.

There’s a growing appetite to be able to race on circuits outside of Australia across the board.

SPEEDCAFE: Another element of GT3 that has proven attractive to competitors is more track time. You’ve now announced your own Endurance Cup. What can you tell us about that? Porsche will have its own Endurance Cup next year

SAKZEWSKI: We’re yet to sort the details of the format, but it is about getting more seat time for our primary drivers just to mix things up, complementing what we do with the Pro-Am.

The three sprint race format is what we’ve run since the beginning and it works well, but people are looking for variety and certainly the opportunity to have some extended races is attractive.

SPEEDCAFE: Is the ideal scenario to run the Endurance Cup races alongside the Supercars version at Sandown, Bathurst and the Gold Coast?

SAKZEWSKI: That would be a great way to round out the season. There are a lot of ducks to line up before that can be confirmed, but we’re talking that through with the promoters.

At this stage that would be the preferred outcome, to have the Endurance Cup coming at the tail end of the season.

But if it’s something that we have to accomodate at some of the earlier events to make it happen, we will do so.

The exact format we’ll run is also part of those discussions with promoters.

We’re looking at a similar format to what we do with the Jim Richards Endurance Trophy in the GT3 Cup Challenge, where effectively the Endurance Cup would be based around the longer races, not necessarily the whole weekend.

SPEEDCAFE: Traditionally current Australian-imported Carrera Cup cars have only been allowed to run in the championship, but you’ve also made the current car eligible for the Bathurst 12 Hour. Why the change there?

SAKZEWSKI: The current car is going into its fourth year of use in Carrera Cup.

Normally we work on a three-year cycle, so a lot of people that invested in cars were expecting to run their 991s in the 12 Hour in 2017.

We looked at it and decided that it’s a great opportunity for our competitors to get some miles around an iconic circuit and do a bit of pre-season testing as well.

We talked about it with our competitor base and reviewed it internally and Supercars were very keen to see as many Porsches on track as possible.

SPEEDCAFE: Is eligibility for the 12 Hour something that will continue when the new Carrera Cup car comes online in 2018? 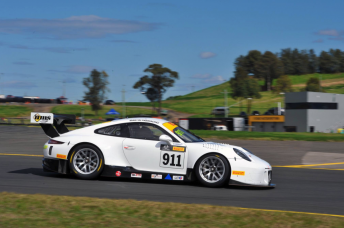 SAKZEWSKI: We’ll review that next year. One of the issues may be actually getting the cars here in time and having them ready.

They will be produced and come out of the factory in Weissach at the tail end of 2017, so the arrival date may preclude them from the 12 Hour.

SPEEDCAFE: The GT3 R is eligible for Class A at the 12 Hour. What can you tell us about Porsche’s presence in the outright class next year?

SAKZEWSKI: At this stage there are four customer cars looking to enter for next year.

Walkinshaw Racing already have a car here and there are teams in Asia and the Northern Hemisphere that have signalled their intent to run.

As Porsche does globally with their customers, there will be a level of factory support that will go with those cars.

Exactly what that looks like is still under discussion. Obviously with the 12 Hour the classifications have changed where you can now have an outright Pro entry.

That moves the goal posts a little bit in terms of how you approach it, so there’s a fair bit of discussion going on at the moment.

But certainly you can say that the Bathurst 12 Hour is definitely recognised globally by manufacturers such as Porsche as an iconic event and it’s one that Porsche would love to win.

There will be support coming through, but there are no exact details on equipment, personnel or drivers at this point.