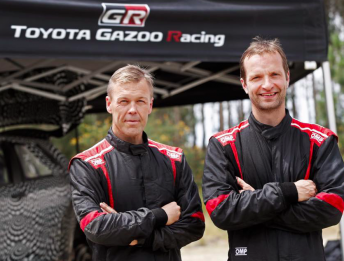 Toyota has confirmed Juho Hanninen for its highly anticipated return to the World Rally Championship next season.

The 2010 Intercontinental Rally Challenge winner had been expected to land one of the two seats having played a major role in the development of the Japanese marque’s 2017 Yaris WRC challenger.

Hanninen’s appointment sees the 35-year-old return to the WRC for the first time since a one-off drive in Rally Finland last year.

The Finn will be joined by experienced co-driver Kaj Lindstrom, who partnered Toyota’s team principal and four-time world champion Tommi Makinen in 2002-2003.

“This really feels like a dream come true,” said Hanninen.

“Joining a works team with such potential for a full season is a real opportunity for me.

“We have been working together since the car’s first outing, so that makes it all the more exciting and motivating.

“The Yaris WRC is incredible. I can’t wait to get started at the Rally Monte-Carlo.” Toyota team manager Makinen believes Hanninen will prove to be a valuable signing for the squad given his knowledge of the Yaris WRC.

“When he joined the team, Juho was incredibly motivated and involved,” said Makinen.

“He also understood very clearly that we didn’t want to cut any corners and that the 2017 season would be about coming to grips with the championship and learning.

“He has quite a lot of experience in the World Rally Championship, and I’m sure that because he has developed the Yaris WRC from the beginning, he knows the car best.”