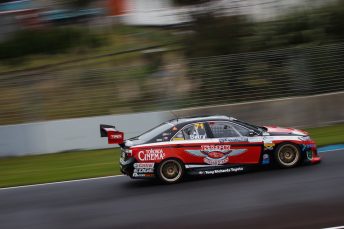 Bargwanna, a double TLX NZ Touring Car champion, will remain with the Richards Team Motorsport squad, moving across to a recently acquired Ford TLX for the season opener on the Supercars undercard.

The 2014/15 NZ V8 Ute Champion Barry gains a full-time call-up after replacing Bargwanna for the final round in the Camry last season.

“To have a teammate of Jason’s calibre is going to be unreal.”

“I will be picking Jason’s brain to help get every tenth out of the Toyota.

“With two cars in the team that are very similar, it’s going to really help aid my step up to the top class in NZ Motorsport.”

Bargwanna expects the Falcon to be similar to the Camry and will be able to match it with the rest of the field.

“I have driven this car many moons ago, but the reality of the rules means it should be very similar. It won’t have that Camry ‘bark’ we have grown to love, but it’s the same under the skin, the same gearbox, suspension and brakes.

“So I am very confident we will be there or thereabouts with the rest of the field.”

“As the old bloke in the team now I am excited about sharing the info rattling around in my head.

“Sam has proven to be more than capable and fast, so I am looking forward to the challenge and both of us working to make the Richards Team champions again.”

“Over the years in New Zealand I have been fortunate to have Simon Evans, AJ lauder and Scott Taylor as teammates, and now I looking forward to working with Sam.”