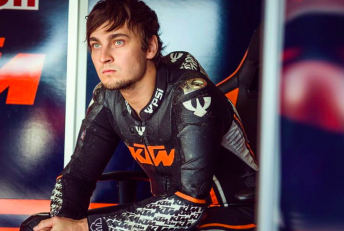 Karel Abraham will return to MotoGP next season after securing a deal with the Aspar Ducati squad.

The Czech rider will replace Yonny Hernandez as part of an all-new look line-up for the Spanish team next year.

Abraham will ride a two-year-old Ducati GP15 while his new team-mate Alvaro Bautista will be equipped with a 2016 specification machine.

The announcement will see the 26-year-old rejoin the premier class after a season competing in the World Superbike Championship.

Abraham has made 67 MotoGP starts since his debut campaign in 2011.

“I am really pleased to come back to MotoGP,” said Abraham.

“I started to work on this goal as soon as I knew there was a possibility.

“I am really happy to be coming back to Ducati, which is my favourite bike, and also thinking about my first season with them, which was my best season.

“It’s an honour to be a part of this team, which is so famous in the paddock, so professional and so good. Together with Ducati I believe we can make a very good connection.”

Alongside his World Superbike Championship commitments, Abraham has assisted KTM with its testing program ahead of its premier class debut next year.