Inspirational Alex Zanardi triggered an outpouring of emotions when he won the final race of the Italian GT Championship at Mugello.

In his first drive behind the wheel of the BMW M6 GT3, Zanardi was victorious after finishing sixth earlier in the weekend.

Having not raced for more than a year, Zanardi’s win came on the back of his two paracycling gold medals and a silver at the recent Paralympics in Rio de Janeiro.

Qualifying third, Zanardi was promoted to start second after the withdrawal of a rival before he ended the first lap in third.

Zanardi claimed the lead when the pit stop window opened and again held the advantage after he completed his compulsory stop in the BMW Team Italia/ROAL Motorsport entered machine.

“There are no words to describe what I feel. Today I saw the sun setting and it never looked that beautiful. What a year, not only what a day,” said Zanardi.

“Once more I enjoyed beautiful moments in Rio de Janeiro, and now just jumping into this beautiful car was amazing.”

Zanardi even afforded time to acknowledge the effort of Marco Wittmann who claimed his second title for BMW in the DTM finale at Hockenheim.

“He is an amazing and super fast young driver. He and the whole BMW DTM team with all the drivers can be proud of what they did this season,” he added. 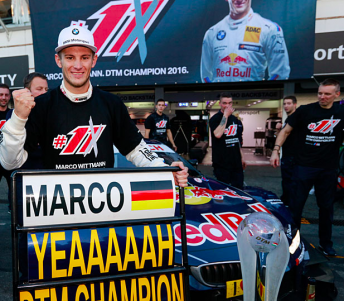 Edoardo Mortara did all he could to lift the title, however Marco Wittmann did just enough to claim his second DTM crown in a thrilling finale at Hockenheim.

In the final 39-lap race, Mortara (Abt Audi) claimed the spoils but had to rely on RMG BMW gun Wittmann finishing further back than fifth.

Wittmann duly crossed the line in fourth to finish on 206 points, a mere four ahead of Mortara.

Mortara was brilliant after he came from seventh to rip through the field in the opening laps to assume the lead.

Earlier in the weekend, Abt Audi driver Miguel Molina landed the opening 27-lap heat ahead of Wittmann and Mortara. 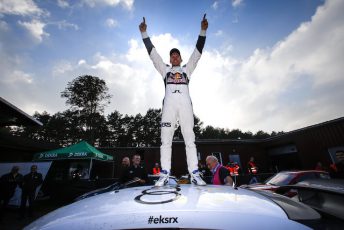 Mattias Ekstrom’s decision to bypass the DTM finale paid the best possible dividends when he claimed a maiden FIA World Rallycross Championship title with one round to spare in Germany.

If Ekstrom has the worst possible result in the final round, Solberg would need maximum points to draw level but would ultimately be beaten on a count back, which goes on victories through the season.

“This is probably the best day in my whole motorsport career – it feels like I have electricity running through my whole body,” Ekstrom said.

Olsbergs MSE driver Kevin Eriksson took the round win, his first in the World Rallycross Championship.

The final round is scheduled for Rosario, Argentina, on November 25. Former Toyota Racing Series New Zealand ace Lance Stroll has made a one-act affair of the closing round at Hockenheim.

With the title already well and truly in his keeping, Stroll (Prema Powerteam) landed a sweep of the three races.

The Williams F1 development driver finished a signature year on 507 points, a massive 185 ahead of nearest rival Maximilian Gunther.

“The final weekend has been great fun and I could hardly have hoped for more than a hat-trick of wins,” Stroll said.

“All in all, my two years in the FIA Formula 3 European Championship have been very nice, I really have enjoyed them.”

Cassidy opened with a third place but then was forced to retire with damage to the front-left on Lap 3 of the middle heat before he completed the weekend with a fourth place.

The multiple TRS and New Zealand Grand Prix winner finished fourth in the standings, 20 points out of third place. Chaz Davies dominated the penultimate round of the World Superbike Championship at Spain’s Jerez Circuit.

The Aruba Ducati rider produced an impressive ride in the opening heat as he reeled in Kawasaki title rivals Tom Sykes and Jonathan Rea before jumping to the lead in the early stages.

Once ahead, Davies went on to take the chequered flag by three seconds from Sykes, who took points from championship leader Rea.

Davies denied Rea from recording a second World Superbike Championship with a dominant ride to victory in the second race.

The Welshman stormed from sixth on the grid to the lead at the end of the opening lap.

Davies had the measure of his rivals as he streaked to a six second lead at the flag to score his fourth consecutive win.

West ended the weekend by rounding out the top 10 as Brookes settled for 12th position.