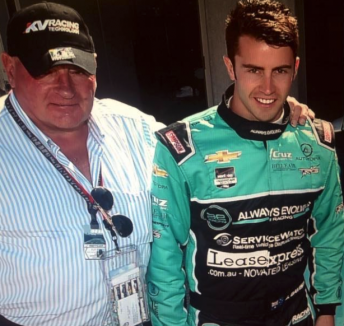 Davison has accepted an offer as general manager for a group of six racetracks owned by Chinese property tycoon Jim Ye Mingqin.

The colourful Melbourne identity who was responsible for growing the Sandown 500 as promoter at the circuit for several decades will relocate early next year to Beijing, the city where one of  Ye Mingqin’s tracks, GoldenPort, is located.

The GoldenPort facility houses 80 automotive businesses that includes car dealerships and showrooms for the likes of exotic and luxury marques.

Davison’s son Charles, who is fluent in Mandarin, is the director for the Chinese GT Championship which is owned by Ye Mingqin.

The elder Davison, who finished his Sandown duties in 2007, said the opportunity in China had come ‘out of the blue’ while on a recent visit to see Charles.

“Unbeknown to me Jim Ye was looking for an experienced circuit operator,” Davison told Speedcafe.com.

“In talking to him about my experience at Sandown gained over twenty years as the operator and promoter, he requested I meet with him and he offered me the position.

“The position entails overseeing the construction, maintenance, presentation and staging events at his circuits throughout China. The market is huge.”

Charles Davison is in charge of the GT Championship which faces stiff competition from the rival GT Asia Series and Stephane Ratel’s new series to begin in 2017.

Davison had previous experience in motor racing in China as the former commercial manager for the Asian Le Mans Series two years ago.

His brother James Davison has fashioned a successful racing career in the US, this season driving for Nissan in the Pirelli World Challenge and a couple of appearances TRG which ran an Aston Martin in the IMSA Series.

James Davison has previously competed in several IndyCar races including two Indy 500s starts and more recently made his debut in the NASCAR Nationwide Series at Road America.