Harvick streaks away at Kansas

Harvick streaks away at Kansas 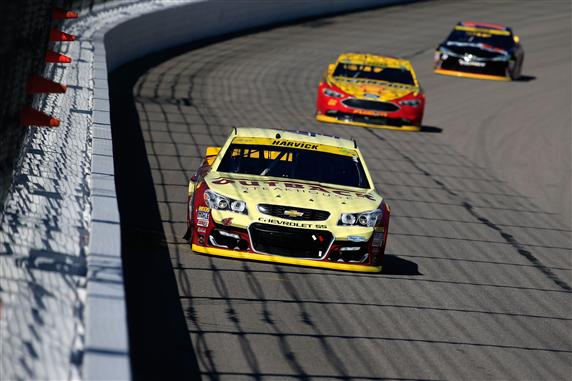 Harvick’s win puts him into the Round of 8

Kevin Harvick took his 35th career win at Kansas Speedway to lock his place in the final eight drivers in the Chase for the Sprint Cup.

After failing to finish last weekend at Charlotte, winning at Kansas was crucial as next weekend the series heads to the unpredictable Talladega Superspeedway.

Only Jimmie Johnson and Harvick are guaranteed places in the Round of 8 thanks to their victories today and last week.

Claiming the lead on Lap 238, Harvick was determined to hold out any challengers to take the chequered flag for the second time at Kansas.

“These races are hard to win and these guys are so good at the details,” said Harvick.

“When you put their backs against the wall they’re even better. I’m so proud of them.”

Carl Edwards led for 61 laps, but the Toyota driver could not catch Harvick’s Chevrolet.

The top five was completed by Joey Logano, Johnson and Kyle Busch.

Of the drivers in contention for the Sprint Cup, Austin Dillon finished sixth, Matt Kenseth was ninth, Martin Truex Jr. came home in 11th, Kurt Busch in 13th, Denny Hamlin back in 15th; while a tough day for Chase Elliott saw him in 31st and Brad Keselowski scored as the 38th place finisher.

Elliott was leading with 100 laps to run but had two separate tyre issues. For Keselowski a trip across the grass tore the entire front out of his Penske Ford.

Currently, Dillon, Hamlin, Keselowski and Elliott are the four contenders sitting below the cut-off position on the Chase Grid. Dillon is tied with Logano, with Logano’s third-place finish holding the tiebreaker for the provisional race spot.