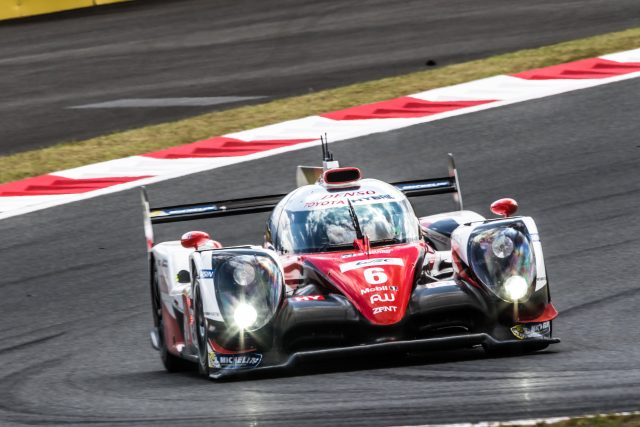 Toyota holds on to beat Audi in a thriller at Fuji

Toyota has craftily pulled off a remarkable home victory after rolling the dice to clinch Round 7 of the World Endurance Championship at Fuji.

Playing second fiddle to Audi for much of the 6 Hour journey, the #6 TS050 of Kamui Kobayashi, Stephane Sarrazin and Mike Conway held on to win by 1.4s.

The Toyota Hybrid crew gambled on a short final pit stop for Kobayashi inside the final hour, only taking on fuel, potentially leaving the #6 machine a sitting duck for Audi.

However the #8 Audi, at the hands of Loic Duval, could not bridge the gap despite taking on new tyres in its final stop with the R18 e-tron he shared with Oliver Jarvis and Lucas di Grassi, desperately just short in a race it had dominated.

Mark Webber, Brendon Hartley and Timo Bernhard were gunning for their fourth win on the bounce in the #1 Porsche 919 Hybrid but had to settle for third after putting up a gallant fight.

The result sees the #6 Toyota trio move to 117 points and close within 23 of the #2 Porsche in the driver’s standings with two races remaining.

Capitalising on pole, Jarvis eased clear from the start to hold a comfortable lead in the #8 Audi.

Jarvis unleashed a rousing double stint as the Brit completed an astonishing 88 passing moves to give Audi a much needed advantage in the first third of the race.

A stirring mid-race stint by starting driver Webber saw Porsche close on the leaders before he handed over to Bernhard.

The #1 machine moved to less than a handful of seconds behind the Audi of Duval and Sarrazin in the Toyota.

Sarrazin meanwhile engaged in a thrilling dice as he traded places briefly with Bernhard with just over two hours remaining before the latter settled into second position.

Duval clung to a 4.6s lead ahead of Bernhard with Sarrazin in close attendance ahead of the sister Toyota of Kazuki Nakajima in a tense fight between the LMP1 factory machines.

Audi was forced to fly solo with the #8 machine for the majority of the race after a Hybrid problem cruelled Benoit Treluyer’s race.

Treluyer completed just 17 laps in the #7 R18 e-tron quattro he shared with Marcel Fassler and Andre Lotterer before it returned to the pits.

After a lengthy spell in the garage, the Audi returned to the action, albeit running on purely combustion power, with just over four hours remaining.

However with the front drive shafts removed following the MGU failure, it was deemed by the FIA to not conform to homologation, leaving Audi with no choice but to retire it from the race after turning a total of just 36 laps.

A localised yellow flag was produced with just under four hours remaining for the #4 Bykolles CLM P1/01 – AER of Simon Trummer who stopped momentarily before managing to refire the privateer LMP1 soon afterwards.

LMP2 saw another close finish with Will Stevens, Alex Brundle and Roman Rusinov taking the G-Drive Oreca-Nissan to a 1.3s class win over Bruno Senna, Felipe Albuquerque and Ricardo Gonzalez in the RGR Sport by Morland Ligier.

Ford returned to its best form since Le Mans with Andy Priaulx and Harry Tincknell beating the sister GT of Olivier Pla and Stefan Mucke.

The GTE Am class was taken by Pedro Lamy, Paul Dalla Lana and Mathias Lauda in the Aston Martin V8 Vantage.

WEC returns for the next round at Shanghai from November 3-5.