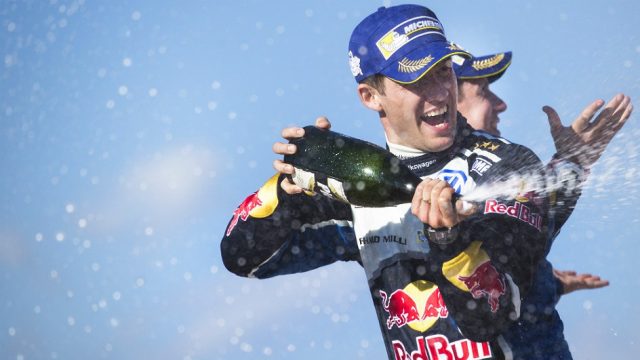 Plenty of smiles for the four-time WRC champion

Sebastien Ogier has scored his fourth-straight World Rally Championship title with victory in the Rally of Spain.

After being down by 17 seconds at the end of the first leg in wet muddy conditions, Ogier hit back on the second full day on the dry asphalt.

On the final leg he was untouchable and even took the second fastest time on the Power Stage behind Volkswagen team-mate Jari-Matti Latvala to win his 37th individual WRC round by 15.6-sec from Dani Sordo (Hyundai).

“It’s amazing. Champion with two events still to run and it’s been just about the perfect season,” said Ogier who scored his fifth win of the season.

“The fourth world championship title for Julien and me, it is impossible to describe how this feels.

“The tension ahead of the closing Power Stage was obviously greater than usual, given the fact that we were within touching distance of the title, and bearing in mind the mistake we made last year. But we’ve done it.” As well as Sordo’s second place, Hyundai filled the next two positions with Thierry Neuville and Kiwi Hayden Paddon.

“I think we can be happy with the pace we’ve had on tarmac for the last day and a half. We can take a lot of pleasure from that, that at long last we’ve made some progress on tarmac.

“Even better for the team to have three cars in the top four and a good payback for all the work everyone’s putting in back at the factory and here on the rallies.”

The final day saw the retirement of Kris Meeke with an engine issue while Martin Prokop tore the front right wheel off his Ford.

The fight for second and third in the drivers’ series was blown open in Spain and Volkswagen must wait to secure its fourth manufacturers’ championship until Wales Rally Great Britain at the end of this month or Rally Australia on 17-20 November.