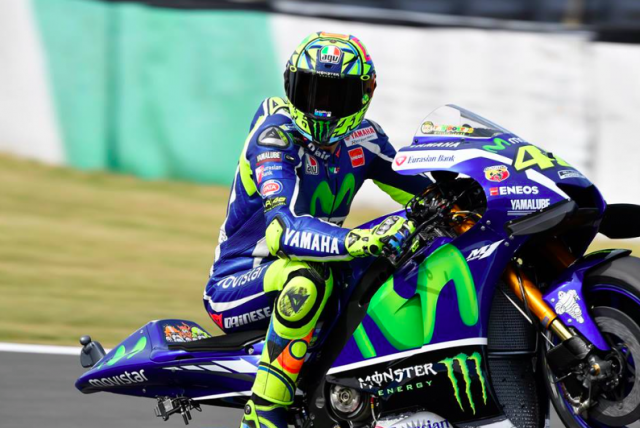 Valentino Rossi has taken a surprise pole for the Japanese Grand Prix after Marc Marquez was hampered by errors and a yellow flag late in qualifying.

The pair will share a heavyweight front-row completed by Jorge Lorenzo.

Marquez, who topped the timesheets after practice, looked set to blitz the field when he laid down the fastest lap of the weekend on his first flier before going half a second faster again on his next lap.

Andrea Dovizioso (Ducati) briefly went second during the second run before Rossi and Marquez turned the pace up.

Rossi took his Movistar Yamaha to the top, the first man into the 1:43s bracket, while Marquez ran wide at the 90 Degree Corner just behind and had to abort a second straight lap.

Marquez then slowed through Turn 5 next time around as he heeded the yellow flags for the stricken Crutchlow, who had dropped his LCR Honda just moments earlier.

With the chequered flag already at the ready, the Spaniard was forced to settle for second on the grid.

Rossi, however, appeared to continue through the yellow zone at normal speed, though he had already set his pole time.

“We struggled during the weekend to find the right setting,” admitted Rossi, “and also I’m not at 100 per cent – I’m a little bit sick.

“When I saw 43.9 (lap time) I was very happy and it will be very important to start from the pole tomorrow.”

Marquez, who leads the championship by a commanding 52 points, was content to start in the middle of the front row despite his misfortune.

“Of course the pole position is a bit better but I feel really good this weekend, much better than I expected, and happy because in the second run I was able to be faster but I made a small mistake on the first lap.”

Lorenzo, meanwhile, was relieved to merely make qualifying after a sickening highside during Free Practice 3 saw the Movistar Yamaha rider airlifted to hospital between sessions before being cleared of serious injury.

“To be honest I was scared,” he admitted.

“When I touched the tarmac after the flight I thought I injured my left foot but it was just a muscle problem.

“On the bike with the adrenalin and the heat I felt much better, I just forgot the crash and the pain, and I did a great lap.”

Jack Miller qualified his LCR Honda 14th on his return from injury, while compatriot Mike Jones will start his first ever MotoGP race from 21st on an Avintia Ducati.

Hiroshi Aoyama, filling in for Dani Pedrosa after the Spaniard’s crash the day prior, completes the 22-bike grid.