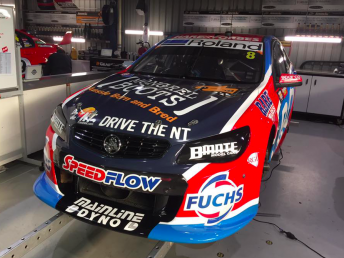 The chassis campaigned by Jason Bright and Andrew Jones suffered heavy damage at Mount Panorama when co-driver Jones hit the wall hard at Sulman Park on lap 92 of The Great Race.

Since the impact, recorded at more than 25g, the Albury squad has worked frantically to repair the car, which has seen extensive work carried out on the front and rear of the chassis.

The squad is set to complete a wheel alignment on the car before its scheduled departure for the Gold Coast on Monday.

Team boss Brad Jones has praised the efforts of his crew to ready the car ahead of the final leg of the Pirtek Enduro Cup.

“It has been a massive amount of work from the guys and girls at Brad Jones Racing to get the car finished,” Jones told Speedcafe.com.

“We had to replace a chassis rail in the rear and some bar work on the front.

“The car has spent a day on the jig getting bits replaced and repaired.

“On Thursday night they started it up and on Friday they put a setup on the car.

“Hopefully we will load the car on the truck on Monday morning.”

A full investigation into the cause of the crash is yet to be conducted by the team.